Army Shoots A Child After She Reportedly Stabbed A Soldier 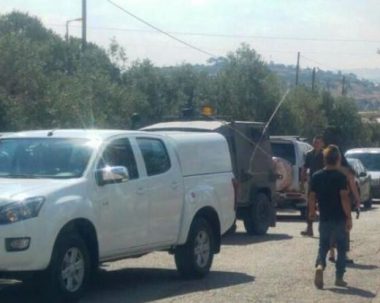 Israeli sources said the girl suffered a severe injury, after the soldiers shot her in the stomach, while the wounded soldier sustained a mild injury and was moved to a hospital. The girl, later identified as Nawf Eqab Enfei’at, 16,  received treatment at the scene, and was later moved to a hospital.

Israeli daily Haaretz quoted colonist settlers claiming that the soldiers demanded that she stays away from the post, “but she approached them, and stabbed one before she was shot.”

Following the incident, the army closed the main Palestinian road, linking between the governorates of Jenin and Tulkarem, also blocking traffic to all villages and towns near Jenin city.