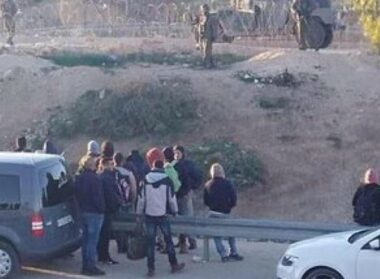 On Monday, Israeli soldiers shot two Palestinian workers near the ath-Thaheriyya town, south of Hebron city, in the southern part of the occupied West Bank.

Eyewitnesses said the soldiers, stationed at the Mitar crossing, fired many live rounds at Palestinian workers while trying to cross.

They added that the soldiers shot No’man Mohammad al-Awawda and Ahmad Abdul-Karim Salama, with live rounds in their lower extremities, before moving them to an Israeli hospital.

The soldiers also chased and tried to abduct many workers after the army closed the crossing and refused to allow them to cross.

On Saturday, July 16th, 2022, the soldiers injured six Palestinian workers after chasing their car, causing it to crash near Hebron, in the southern part of the occupied West Bank.

It is worth mentioning that the army frequently attacks, chases, injures, and abducts Palestinian workers near the gates of the illegal Annexation Wall near Jenin, Hebron, and other parts of the West Bank.