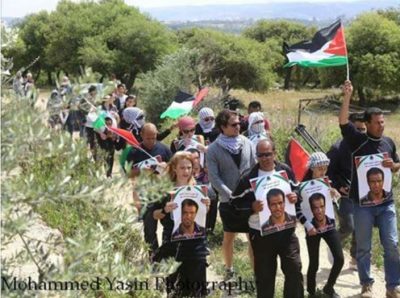 The Weekly protest in Bil’in village, west of Ramallah in the central West Bank, was held Friday, commemorating the eighth anniversary of the death of Bassem Abu Rahma, one of the senior figures of the popular resistance in the village, who was killed by Israeli soldiers during a nonviolent protest against the illegal Israeli Annexation Wall and colonies.

Bassem Abu Rahma was killed at age 31 on April 7th, 2009, when an Israeli soldier shot him with a high-velocity teargas bomb directly in the chest. His sister, Jawaher Abu Rahma, asphyxiated to death, on January 1st 2011, after the soldiers fired dozens of gas bombs at nonviolent protesters.

Friday’s procession was organized by the Popular Committee against the Wall and Colonies in Bil’in, and was attended by dozens of locals, accompanied by Israeli and international peace activists.

The protesters marched from the center of the village, carrying Palestinian flags and posters of Bassem, in addition to pictures of many Palestinian political prisoners, held by Israel, and called for their release, especially as the detainees are preparing for an extended hunger strike, staring on April 17th – Palestinian Prisoners Day.

Some protesters burnt tires near the gate of the Annexation Wall, expressing their rejection of the ongoing illegal Israeli occupation and colonization of Palestine, while the soldiers used surveillance drones to film the protesters.

Coordinator of the Popular Committee against the Wall and Colonies in Bil’in, Abdullah Abu Rahma, said the village started its activities in support of the Palestinian detainees as they mark April 17th, and called for massive popular protests in every part of occupied Palestine, in support of all political prisoners, who are facing constant harassment, violations and abuse.

Nonviolent activist and the brother of Bassem and Jawaher, Ashraf Abu Rahma, told the IMEMC that the lawyer representing the family in Bassem’s case in Israeli courts, said the Israeli military is claiming it does not know the identity of the soldier who shot him, and is trying to get the court to close the case.

“We are not surprised, they kill with impunity,” Ashraf stated, “They told the lawyer they are closing Bassem’s file, they claim there is not sufficient evidence – they admit they shot him but claim they do not know who was the soldier or even his brigade.”

“The world needs to know that while Israel claims to be a democracy, it continues to violate our rights, kill our people and steal our land. This is a criminal occupation that has no respect for any” Ashraf said, “They shot him with a high velocity gas bomb, just like the one they used to shoot American peace activist Tristan Anderson [shot in the head by a high-velocity tear gas canister in March 2009 and permanently disabled], but they don’t want to be held responsible for any of their crimes.”

Ashraf Abu Rahma himself has faced violent attacks against him by Israeli soldiers, like his two murdered siblings. In July of 2008, Ashraf was detained by Israeli soldiers during a nonviolent protest in the nearby village of Ni’lin, and after he was handcuffed and blindfolded, an Israeli soldier standing next to him pointed his gun at his leg and shot him with a rubber-coated bullet.

“They claim to be a democratic state, but act like the wild west in occupied Palestine,” Ashraf said, “They killed my brother, they killed my sister and shot me while I was handcuffed and blindfolded, and above all of that, they do not want to be held responsible for anything.”

The shooting of Ashraf was also caught on tape by a young Palestinian girl; Israeli soldiers kidnapped her father later as a punishment for publishing the video and exposing their crime.

Also on Friday, Israeli soldiers also assaulted the weekly nonviolent protest against the Annexation Wall and colonies in Ni’lin village, west of Ramallah, and wounded a young Palestinian man before abducting him.

In related news, the soldiers attacked the weekly protest in Kufur Qaddoum town, in the northern West Bank district of Qalqilia, and shot three children with rubber-coated steel bullets, in addition to causing many protesters to suffer the effects of teargas inhalation.