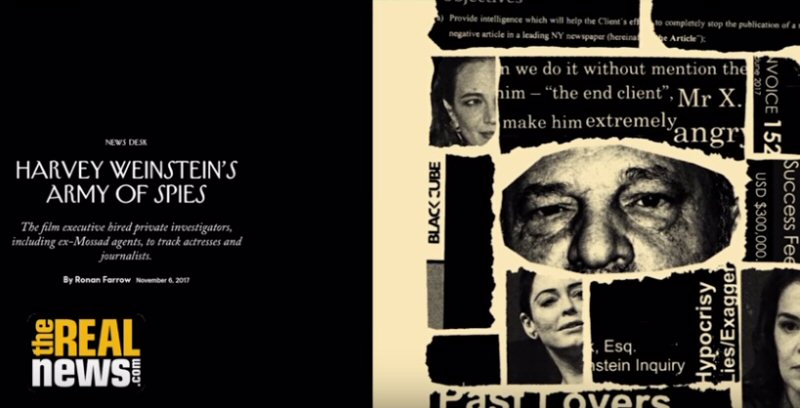 The disgraced film producer contracted the Israeli firm “Black Cube” to spy on his accusers. Journalist and best-selling author Max Blumenthal says that’s no surprise given Israel’s role as a “leading expert on repression”.

Max Blumenthal is an award-winning journalist and bestselling author whose articles and video documentaries have appeared in The New York Times, The Los Angeles Times, The Daily Beast, The Nation, The Guardian, The Independent Film Channel, The Huffington Post, Salon.com, Al Jazeera English and many other publications. His most recent book is Goliath: Life and Loathing in Greater Israel. His other book, Republican Gomorrah: Inside The Movement That Shattered The Party, is a New York Times and Los Angeles Times bestseller.

AARON MATÉ: It’s The Real News. I’m Aaron Maté. Just a few weeks before he was outed as a rapist and sexual predator, the film producer Harvey Weinstein was asked about his affinity for Israel.

Interviewer: Does Israel advocacy play any role in your life, in supporting it at all?

H. WEINSTEIN: I’m an Israeli in my heart and mind. I love that country. I love what it stands for, I’m proud to be Jewish.

AARON MATÉ: It turns out Weinstein has a closer Israeli connection than he let on. A recent piece in the New Yorker revealed that as part of his campaign to cover up for his crimes and abuses, Weinstein hired a private Israeli intelligence firm called Black Cube to spy on his accusers. A female Black Cube operative posed as a women’s rights advocate to meet with Weinstein victim Rose McGowan. The same operative also posed as one of Weinstein’s accusers to get a meeting with a journalist who was reporting a story on the allegations.I’m joined now by Max Blumenthal, senior editor of Alternet’s Gray Zone Project, and the award-winning author of the books, ‘Goliath,’ ‘Republican Gomorrah,’ and ’51 Day War.’ He is cohost of the podcast Moderate Rebels, and his new piece for Alternet is called, “Why Harvey Weinstein Turned to Israel’s Intelligence Services to Suppress His Sex Abuse Accusers.”Max, welcome. Let’s talk about just the title of your piece. Why did Harvey Weinstein turn to Israel’s intelligence services, in this case, this firm, Black Cube?

MAX BLUMENTHAL: I think the first reason that Weinstein turned to the Israeli firm Black Cube, which is comprised of former Mossad leadership and operatives and Israeli Army former officers, is his connection to the pro-Israel lobby in the U.S. Those comments that you played at the top of the broadcast were from an interview that Harvey Weinstein conducted at the Algemeiner Annual Gala, where he was given an award on stage with Holocaust Patron Saint, the late Elie Wiesel, who’s also actually been accused of sexual assault in recent days.The Algemeiner is pro-Israel group that’s closely connected to another right-wing pro-Israel group, the Simon Wiesenthal Center. It appears to be funded by Sheldon Adelson, the pro-Israel billionaire. It runs an online publication that routinely demonized advocates of Palestinian human rights, like myself, as anti-Semites. Harvey Weinstein has donated at least $100,000 to the Simon Wiesenthal Center, and he’s been honored there as well.He’s obviously been connected not only to the pro-Israel lobby, but to Israeli leadership as well through this network. It was Ehud Barak, the former Israeli prime minister, defense minister and accused war criminal, who connected Weinstein to Black Cube. Barak obviously knew some of the leadership there. It’s not clear if he has used Black Cube. That was how Weinstein got hooked up with Stella Penn Pechanac-

AARON MATÉ: By the way, this recommendation from Barak came at a fundraiser for Hillary Clinton, right?

AARON MATÉ: Ronan Farrow, who reported the story for the New Yorker, who broke this news, he writes that, he wrote on Twitter that, “It was the craziest story I’ve ever reported and a rare professional experience that made me fear for my safety.”

MAX BLUMENTHAL: I think Ronan Farrow was actually approached by the Black Cube operative, along with Ben Wallace, who had been reporting the story for New York Magazine on the allegations about Harvey Weinstein’s sexual abuse. Another journalist had been approached by this operative. That’s the kind of thing that’s chilling to a journalist, when you realize that someone you’ve been talking to isn’t who they say they are and they’ve actually been working with an agency that has a potentially violent capacity, definitely working with former employees of one the world’s most vicious intelligence services, that carries out assassinations around the globe.The operative who was hired to infiltrate the lives of Harvey Weinstein’s accusers was named Stella Penn Pechanac. I think she’s 32 or 33 now. She was a former Israeli Air Force officer and she was also an aspiring actress. It’s unclear to me how she got hooked up with Black Cube, but one clue was that she participated in a program with IDC Herzliya, which is an Israeli university which is heavily invested in Hasbara, or pro-Israel propaganda. It gives fellowships to students who speak English, who are attractive, who are capable of really sophisticated public speaking presentation, gives them fellowships and trains them in propaganda. Then it sends them abroad.She may have been pipelined from that program into Black Cube, because they were looking for someone who could actually pose as a women’s rights advocate. Black Cube set up a fake financial firm or an investment firm called Rubin Partners that Stella Pachanac was attached to. She posed as Diana Phillip and she managed to befriend the actress Rose McGowan, who is one of Harvey Weinstein’s alleged victims. She had several meetings with McGowan, offered her $60,000 to accept an award from Rubin Partners as a woman’s rights hero. This is how she managed to operate.One of the journalists who met her said she posed as one of Harvey Weinstein’s victims, in fact, and her job there was to actually find out what the journalists planned to report on Harvey Weinstein. She was using a velvet glove approach. This is the soft edge of Black Cube’s subterfuge methods. Black Cube operatives have also been involved in trying to destroy the life of Romania’s chief corruption prosecutor through hacking, through intimidation, and they’ve been active around the world. It’s actually unclear what they do, but it was simply no coincidence that Harvey Weinstein turned to Israel or to former Mossad operatives for a dirty job like this.

AARON MATÉ: Max, speaking of using former Israeli operatives for dirty jobs, I was reminded when I saw this story of the long history between powerful elements of the U.S., including the government, using Israel for tasks that they don’t want to get their hands on themselves for fear of public scrutiny. Speaking especially of Israel’s role in Central America in the late ’70s and ’80s, after Congressional scrutiny of Reagan’s war on various leftists or peasant-based groups in Central America, the CIA turned to Israel to do its work for it, and actually even before Reagan, when Carter cut off aid to the Somoza regime in Nicaragua, it was Israel that stepped in to keep providing Somoza with support in its fight against the Sandinistas. I’m wondering your thoughts on that parallel there.

MAX BLUMENTHAL: It’s true, and Israel also armed the Guatemalan military as Efraín Ríos Montt carried out a campaign of genocide against the Mayan population of his country. He did it because of the Boland Amendment, which would have required kind of an executive signature on any covert activity. So the U.S. just turned to Israel. The Saudi Prince Bandar was also a liaison.The U.S. has this long history of using Israel as kind of a covert proxy but, I think in this case, we need to look at just a different aspect of the role that Israel plays in the world. That’s kind of the, what I call, “Israelification,” or you could also call it “Gazafication.” Israel is the world’s leading expert on repression, the violent repression, of a restive indigenous population, the Palestinians. Most members of Israeli society have some exposure to the occupation, whether as active participants or indirect participants.Stella Penn Pachanac, who is the operative that Black Cube used on Harvey Weinstein’s behalf, was a former Israeli Air Force officer. You gain experience in maybe maintaining the surveillance systems around the separation wall, or surveilling Palestinians as a member of Unit 8200, which is Israel’s cyber warfare division, which spies on the whole of Palestinian society and then blackmails Palestinians. You work in Israeli intelligence services monitoring Palestinians, maybe not just in the West Bank or the Gaza Strip, but abroad.You develop techniques to do all of this and then, when you leave the military, you need to make a living, so you have to sell your techniques. You set up an intelligence firm and you start selling your techniques to wealthy businessmen and individuals who are involved in illicit and sordid activities. That’s a very good business. Israel is one of the leading exporters of methods of repression. It’s why it’s training police forces across the United States as they militarize against their own, against communities that they regard as dangerous in sacrifice zones across the country.That’s really what this case reflects to me, along with kind of the normalization of rape culture in Israel and in the Israeli military, where according to a 2003 Kinesis survey, one out of three women in the Israeli military reported being sexually abused.

AARON MATÉ: Max, correct me if you think that this is kind of a stretch but, to me, this case also underscores just why solidarity with people around the world is important, and it’s actually linked to our own lives. Here you have a case where the same techniques that were used to oppress Palestinians helped hone the techniques, as you described, that were used against people like Harvey Weinstein’s victims, in the sense that repression elsewhere can be very much connected to abuses here, in ways that we don’t normally think of.

MAX BLUMENTHAL: Yeah, I don’t think I could put it any better than that, and I think that’s something that everyone who has followed this case needs to recognize, is that victims abroad, particularly occupied Palestinians, are preyed on by people who can be weaponized by predators at home. That’s what happened in this case.

MAX BLUMENTHAL: Thanks for having me.

Also from The Real News Network: 11/12/17 UK’s Minister of Development: An Agent of Israeli Interests? (VIDEO)