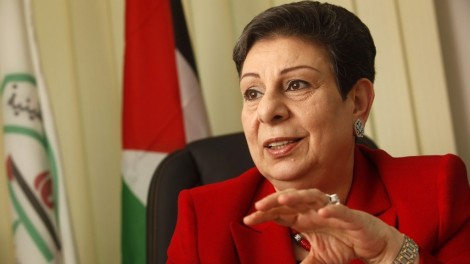 Ashrawi added, according to the PNN,  that, in order for the initiative to succeed, the international community must undertake a concrete action plan with comprehensive objectives, specific terms of reference that guarantee an end to Israel’s military occupation and ensure sovereignty and independence for Palestine within a specific and binding time frame, and mechanisms for arbitration, monitoring and evaluation.

“While we appreciate the EU’s backing of “a just, sustainable and comprehensive resolution of the Israeli-Palestinian conflict, and peace and stability in the region,” the Israeli government should not benefit from a “Special Privileged Partnership” (as stipulated in the Council Conclusions of December 2013) or be rewarded with incentives and advance payments for persistently violating international law and Palestinian human rights and refusing to comply with the basic requirements of peace,” Ashrawi said.

“All along, Israel has consistently receivedpreferential treatment and positive inducements, and it has not responded in kind. It is time that Israel is held accountable for its unilateralism, impunity and total disregard for international law.”

“Direct bilateral negotiations have been exploited by Israel to circumvent and undermine the two-state solution.  Multilateral engagement and decisive policies are called for if the prospects of peace are to be saved.  We urge the EU and other members of the international community to exercise the political will necessary to bring Israel to adhere to international law and conventions and to end the military occupation and the injustice suffered by the Palestinian people, which are a necessary requisite for countering extremism and violence in the region and beyond.”