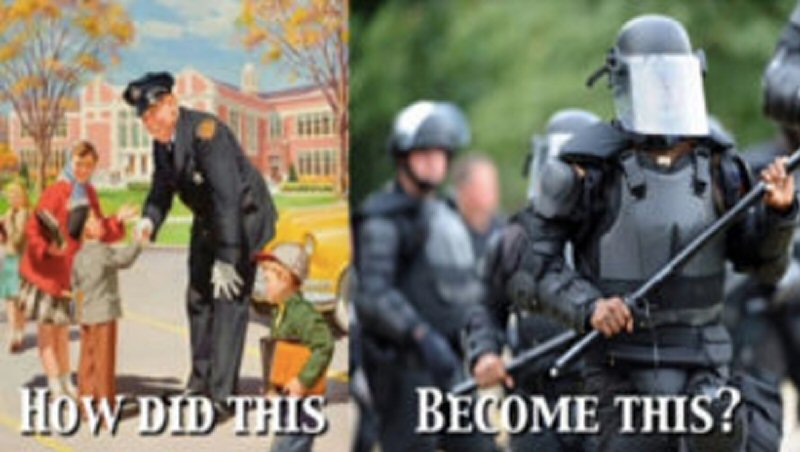 MARC STEINER: Welcome to The Real News Network. I’m Marc Steiner, great to have you with us.

Israel has become the hub to train the world’s police in military tactics, based on its 42 years of occupation on the West Bank. Here in the United States, literally dozens, if not hundreds, of U.S. police departments are being trained in military tactics, intelligence and community control by the Israeli police. The Baltimore police, in the city where we broadcast from, are being trained by Israeli security forces, along with places like Washington D.C. down the road and the New York Police, who also maintain a full time office in Israel.

The nature of the Israeli army has morphed over the last four decades into a national police force to control Palestinians in the occupied territories. The world is learning and they are training. Resistance to this movement came to a head in Durham, North Carolina, where movements like Demilitarize Durham2Palestine and one of its member groups, Jewish Voices for Peace, organized intensely. That pushed the Durham City Council to vote on and pass a resolution that read in part, “The council opposes international exchanges with any country which Durham officers receive military style training since such exchanges do not support the kind of policing we want here in the city of Durham.” It may have been the very first time that a city council has taken such action in the United States.

And we’re about to talk with Jazmynne Williams, who’s a communications and social media manager for the campaign, Demilitarize Durham2Palestine, and a member of the group Black Youth Project 100, one of the coalition’s member organizations. And Jazmynne, welcome. Good to have you here on The Real News.

JAZMYNNE WILLIAMS: Thanks so much for having me.

MARC STEINER: So talk a bit about the genesis of this in Durham and how this began. Because I said one of the first cities, but in fact, Durham is the first city in the United States to actually pass a resolution like this. Are we right about that?

JAZMYNNE WILLIAMS: Yes, you are.

MARC STEINER: So talk a bit about that. Why do you think it happened in Durham and how did you do this?

JAZMYNNE WILLIAMS: Yeah. So one of the really good things about Durham is that there is always a lot of community organizing happening. And so, this campaign didn’t just start up two or three years ago, it came from centuries and decades of people organizing for a myriad of things. Ever since I’ve been in the area, there’s been a lot of work focused around demilitarization of the police and efforts to really invest in the community. So when it came to this campaign of demilitarizing Durham and efforts to forge solidarity with Palestine, it really came out of an understanding that the oppression that we face here, the police brutality, the anti-Blackness, the anti-Semitism, is something that we share with those in Palestine.

MARC STEINER: So I’m going to play this short clip here for people to watch about your movement from people in your movement and come back to talking a bit about the organizing and what this meant, and what we know about this from other cities as well. So let’s just take a watch here for a moment.

AJAMU DILLAHUNT: The Israeli Defense Force brutalizes and terrorizes the people of Palestine and does the Durham Police Department. Here they brutalize and terrorize black and brown communities. So the U.S. funds billions of dollars to the Israeli occupation, so in terms of weapons, tear gas, there are similar things being used against people. People are protesting in opposition to the violence of both forces of the Durham Police Department and the Israeli Defense Forces.

BETH BRUCH: Many municipalities across the country, including Durham, have participated in police exchange programs with Israel. So we really feel like we have an opportunity to put a stop to these programs.

AHMAD AMIREH: We just feel as a group that there’s no room for militarization of police anywhere in America, especially in our home community of Durham. And we don’t believe that our police should train with any military, let alone Israel.

MARC STEINER: So that was the voices of some of the people in the movement Jazmynne, obviously in Durham, that our viewers, people who are watching, are seeing at the moment. But this is across America, whether it’s New York City or San Francisco or Dallas, Texas, small cities and large, Mesa, Arizona, police forces across America are being trained in Israel to learn how to kind of occupy inner city communities, how to stop rebellion, how to become a militarized force. I mean, Israel didn’t create militarized forces in the United States, police forces already were beginning that way, but this is kind of taking an exponential leap. So I mean, what lessons did you learn organizing that might have an effect on the work that people are doing in other cities for the same reason?

JAZMYNNE WILLIAMS: I think a lot of what we learned was how to really push our values into this. When we talk about demilitarizing, we’re not separating all of the nuances from the conversation. We’re having all of the dirty conversations about what this means to interact with black and brown folks and people of different religions and to really get into what these things mean, anti-Semitism, anti-Blackness, the intersections that they have. They’re important, and they’re personal. I feel like a lot of the headway that we’ve made was really because we have people on the ground nationally, globally, who are committed to fighting for communities that invest in people. And I feel like that was a really big part of our win here.

MARC STEINER: Did have to really convince people on the city council, did you have a lot of pushback from people who, when it came time to kind of put this before the city council, get the resolution passed? I mean, what was that political process like? I mean, everybody on the council clearly didn’t have to agree with you, right? So I mean, what was that process like?

JAZMYNNE WILLIAMS: We definitely had a lot of hesitation, especially with the mention of Israel. I feel like a lot of the misconceptions about the campaign is around the mere mention of Israel and believing that just because Israel was mentioned in a conversation about demilitarization, it means that the conversation is inherently anti-Semitic. And while we definitely don’t want to have room in this coalition, this campaign, for anti-Semitism, bringing up things that happen because they did happen within our city, doesn’t make it anti-Semitic. It makes it uncomfortable, it makes it rather difficult to address solutions, but it’s not necessarily something that we can walk away from under that regard.

MARC STEINER: You know, it is interesting. I think that the issue of anti-Semitism, which we could spend a long time talking about, is a very sensitive one and a deep one. And to hear you say that is I think really important, how you just described that. So I’m curious where you think this takes your movement and all these relationships. Because this is not just about Israel, it’s about what we’re doing to our police departments, the role that the Israeli police are playing in this, in training police departments here and around the world, to kind of quell any kind of rebellion and keep a lid on people, on Indigenous people, black and brown people, poor people. I mean, so talk a bit about how you see this, what this analysis says to you, and where you think just takes it. And can you translate what you’ve done there somewhere else?

JAZMYNNE WILLIAMS: Yeah. I’m hoping this takes us up and out. I really want this to spread and I think it’s important. It’s a coalition that we built of community members. They’re people from the community of different races, of different religions, of different socioeconomic backgrounds, all coming together and putting forth what they know to be a fact in our community and trying to push for it to become better. So you have a lot of different perspectives. I feel like a lot of us making progress with our efforts has been really emphasizing the fact that this isn’t just one organization, this isn’t even just two or three or four or even our just ten main coalition members, this is a large community.

And I feel like really coming together and building of that community power, even if it’s just one person at a time, is going to get us there. So I feel like taking it outwards, people really can utilize this model. I feel like it might be different considering Durham is a fairly progressive city, however it’s definitely not impossible.

MARC STEINER: Well, Jazmynne Williams, I really hope you stay in touch with us. We’re going to stay in touch with you, this is really an amazing story and I appreciate your organizing, you work, and for taking the time with us here at The Real News today.

JAZMYNNE WILLIAMS: Thank you so much for your time.

MARC STEINER: Take care. And that was Jazmynne Williams, and I’m Marc Steiner here for The Real News Network. Thanks for watching, take care.