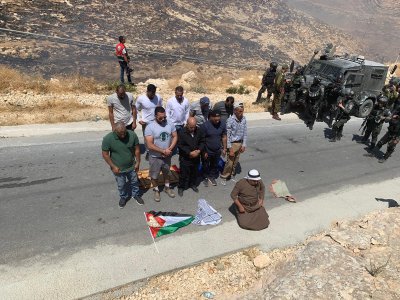 Four non-violent demonstrators were injured, and dozens of others were treated for the effects of tear gas inhalation as Israeli troops attacked on  Friday a nonviolent protest organized at the village of Kufer Malek, east of the central west Bank city of Ramallah.

Among those injured were Jamiel Qassass, who was hit with a rubber coated steel bullet.

Israeli peace activists Udi Gor, Shai Iluk, Toli Flint and Nathan Lindou all sustained injuries after being attacked by Israeli troops. All four activists are from Combatants for Peace Movement.

The protest started at midday, and was organized by the local village council, the Fatah party, and the Combatants for Peace Movement and in coordination with the Popular Committee Against the Wall and Settlements.

The protest called for an end to the land grab and water theft by Israeli settlers.

The protesters divided themselves into two groups. The first group started from the center of the village towards the Israeli settlement outpost constructed on stolen village land.

When they neared the outpost, the Israeli forces launched a barrage of tear gas canisters and sprayed demonstrators with chemical water that generated a bad smell. As a result, dozens suffered the effects of tear gas inhalation.

In addition, due to the dry, hot conditions, the firing of tear gas led to fires that burnt large areas of farmers’ land. The second group, from Combatants for Peace Movement, managed to reach Alon settlers road, adjacent to the village. The road was shortly closed by the demonstrators before Israeli forces attacked the activists by beating them, firing tear gas and rubber coated steel bullets towards them and spraying them with chemical water that generated a bad smell, four were injured.

Moreover, the tear gas fired by Israeli troops caused a fire in the nearby crops belonging to the villagers. The villagers managed to bring in fire engines to put out the fire.

At the end of the protest, Governor Abdel Fattah Hamayel gave a speech welcoming the solidarity activists and praised the efforts of the activist groups like  Combatants for Peace against settlement expansion  and the occupation.

Mr. Jaafar Hamayel, a member of the Fatah regional committee in Ramallah, said, “The aggression of the occupation against us today will increase our determination to continue the journey until we stop the theft of our water and land by the settlers.”

“Today’s activity is the beginning of a peaceful resistance campaign aimed at stopping the theft of Palestinian land by Israeli occupation and settlers,” said Adam Rabie, activity Coordinator for Combatants for Peace.

For seven years, the Israeli settlers from the Kfar Shahar colonial settlement have been expanding their settlement and seizing the land of the village under the protection of Israeli soldiers as part of a plan to link and expand the settlement at the expense of the Palestinian farmers.