Gaza Water Crisis: Political Solution Needed, Not a Technological One 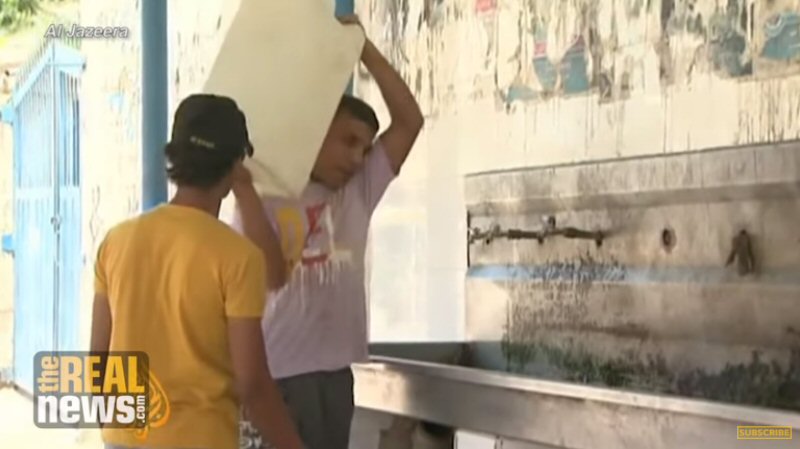 Water contamination is a serious problem in Gaza, but supposedly well-intentioned reports that call attention to the crisis offer only technical solutions that are not only unworkable, but completely ignore the Israeli blockade.

One of the most acute sources of suffering for the 2 million inhabitants of the Gaza Strip is the contaminated drinking water situation. The RAND Corporation, a conservative organization that promotes neoliberal policies and that usually takes very pro-Israeli positions, just published a detailed report about the water crisis in Gaza. One of the authors of the report is a former Israeli soldier. It is, thus, surprising that the Rand Corporation would report on a catastrophe that Israeli policies have caused and that prevents 2 million Palestinians from living a normal life. The findings in the report are very grim, and they warn that unsatisfactory sanitation in Gaza due to contaminated water could cause widespread disease which could spread into Israel and into Egypt.

Last month, the BBC aired a short report on the power situation in Gaza. Here’s a segment of that report.

BBC REPORT: Our children suffer to get a bottle of water. The main water isn’t drinkable. If we don’t have money, they take containers to a communal water supply.

The electricity problem means in every 24 hours we get only 3 or 4 hours. When we get electricity, we plug in our mobile phones, the water pump, and charge the batteries so we can use it for lights when the power is cut.

GREG WILPERT: Already more than a quarter of all disease in Gaza is caused directly by contaminated water, surpassing any other cause of disease in the Gaza Strip. Another report on the water situation in Gaza with the title False Promises for Gaza was just published by This Week in Palestine. It warns that reports on the water crisis in Gaza such as the one by the Rand Corporation tend to have sensationalist headlines, but do not deal with the complexity of the problem. The author of the report, Clemens Messerschmid, joins us today. Clemens is a hydrogeologist who has been living and work in Ramallah since 1997. Thanks for being here, Clemens.

CLEMENS MESSERSCHMID: Hello. Thank you for having me.

GREG WILPERT: Your article warns about one-liner headlines that often accompany reports by international organizations on Gaza, such as the World Health Organization report which warned that Gaza will become unlivable by 2020. If these headlines draw attention to human suffering in Gaza, what is wrong with them?

CLEMENS MESSERSCHMID: Drawing attention to human suffering is very good. Whether you do it the correct way is the question. Claiming that Gaza will become uninhabitable by 2020 is wrong from two sides. On the one hand, why 2020? Why not ’22 or ’23? I mean, how much can people survive if it’s just about survival?

On the other hand, Gaza has long stopped being inhabitable, if we talk about any degree of decency for human life, even the most basic degree of decency. And the most terrible feature for daily life in Gaza is, of course, the lack of any perspective under the current regime, under the current tight blockade, any prospective- any future. So in that respect, gaza has long become uninhabitable.

GREG WILPERT: You also argue that desalinisation in Gaza is not the answer for the water crisis. Why not? What is the answer?

CLEMENS MESSERSCHMID: Well, maybe we should first start with the Rand report, because it has a very long shopping list of interventions proposed and planned. And what strikes me is that I’ve seen 25 reports like that before over the past 20 years. And this report comes along giving detailed recommendations on what to do in wastewater, in water, on the pipes, the infrastructure, and so on, just as if there was no blockade. As if it wasn’t impossible to do any step of normal work, of any normal functioning, under this blockade. So they depoliticised, they blend out the real cause and the real trouble of the situation, and focus instead- and that is very, very common in the water sector, in water projects in Palestine- focus instead on technical fixes, technical solutions, and claim, indeed, that this is simply not possible.

GREG WILPERT: Tell us specifically about the desalinisation. What is the issue there?

CLEMENS MESSERSCHMID: Desalinization, or desalination, is a proposal that dates back 25 years to the very beginning of Oslo. Immediately upon signing the Oslo agreements, especially Oslo II agreements in 1995, Israel started claiming now Gaza should desalinate. And that is for a very simple reason. Israel was never willing to, and isn’t willing, to share the water of the country, as a whole, with Palestinians. Israel follows the simple logic what’s mine is mine, what’s yours is ours, or is even mine as well. Israel doesn’t want to share water. So their solution to the problem was Gaza shall look after itself. Gaza shall look for other sources of water. Not water shared with Israel. That is the principle problematic from the point of view of of water rights, Palestinian water rights, which is a historic struggle for over 100 years now.

Now, this logic has been picked up recently by Palestinian Authority in the West Bank, and even more recently by donor states and donor conferences, like this spring the Union for the Mediterranean has decided to build a huge desalination plant in Gaza, a central plant with 55 million cubic meters of desalinated water per year. What is the problem with that proposal? Well one is the technical problem. Desalination will not work under a blockade, and will be unaffordably expensive for Gazans. The other problem is the principal political approach, because the Rand Report and all these interventions, and also the logic of desalination, is banked on one idea, trying to make Gaza independent, autonomous.

And this is a fallacy. A principled fallacy. Gaza is not a country. Gaza actually happens to have the size, the area, of my hometown, Munich, and about the same population of my hometown. Gaza is a typical city, 362 square kilometers, and about double the population density of Baltimore, where you are sitting.

This is cutting any lifeline, cutting any perspective for a actually normally inhabited city on earth.

GREG WILPERT: Well, thank you so much. This is a very important point that you are making, I think, about the situation of Gaza, and we’ll certainly continue to follow it like we always do. I was speaking to our Clemens Messerschmid, a hydrogeologist who is normally based in Ramallah, but is talking to us today from Germany. Thanks again, Clemens, for having joined us today.

CLEMENS MESSERSCHMID: Thank you very much. Thank you. Good luck.