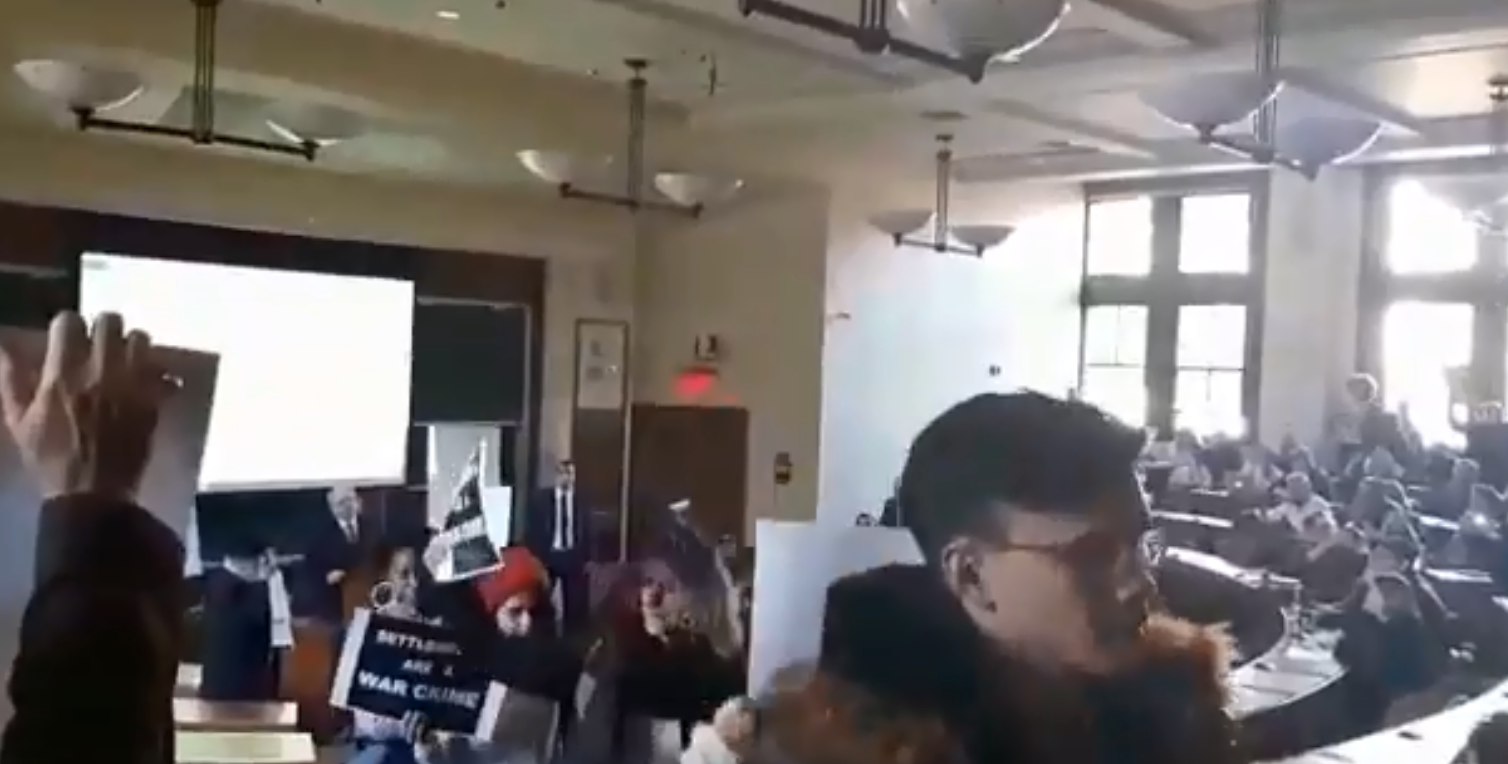 In yet another sign that Palestinian solidarity activists are getting room inside mainstream institutions, scores of Harvard law students walked out on the Israeli consul general, Wednesday, as he began a talk on the settlement project.

The students were largely silent and held up signs saying, “Settlements are a War Crime.” Dani Dayan spoke to a near empty room and expressed contempt for the demonstrators as being like kindergartners.

More than 100 students “from across Harvard” walked out, according to the Palestine Solidarity Committee at the school. Most of the hall empties in this video of the protest posted by Hamzah Raza, a student at Harvard’s Divinity School.

Dayon was left to speak to an almost empty room.

Dayan is himself a settler, and spoke on the “legal strategy of Israeli settlements.” He was sponsored by a program on Jewish and Israeli law at the Law School, and introduced by Noah Feldman, a Harvard law professor and expert on religion, who said that the invitation did not represent an endorsement of Dayan’s views, but a desire to engage his views.

The Palestine Solidarity Committee posted a photograph of the near empty hall after the walkout. It shared credit for the protest with the “Alliance for Water Justice in Palestine.”

Dayan thanked Harvard for hosting him at its “most prestigious institution.”
However, the Palestine Solidarity Committee statement reports that he was disdainful:

Smiling at the sight of the protesters silently leaving the room, Dayan remarked: “I remember a time doing something similar in my kindergarten.” He later tweeted (translated): “On my way back to NYC I’m thinking why are these people so happy with themselves? A bunch of losers trembling in fear of the disciplinary committees of their school.”

That statement characterized the protest as part of a trend:

This event is part of a growing momentum on Harvard’s campus for justice in Palestine. “We do not intend on sitting out on complicity in oppression,” a student organizer remarked. “Not at Harvard, not anywhere else.”

Liberal Zionist Richard Goldwasser seconded the idea that the protest reflects a trend, and Israel better get with it. He endorsed the walkout but said he was saddened.

I support protesting Dayan. At the same time, this saddens me. It’s only going to grow. Israel needs to change course. Now.

Debra Shushan of Peace Now endorsed the protest but echoed Goldwasser’s view. “I feel the same way. If I copied a few lines from your tweet (“This saddens me. It’s only going to grow. Israel needs to change course. Now.”) I could use it as commentary to about half the things I share on Twitter.”

The Palestine Solidarity statement was not saddened:

Dayan is a vocal advocate for the illegal expansion of Israeli settlements into Palestinian territory. In a 2012 op-ed in the New York Times, he wrote that the international community should abandon its vain attempts at the two-state solution and accept the Israeli presence in the West Bank as “an irreversible fact.”

Israeli settlements are blatant violations of international law, and the Israeli settler movement is a violent project of settler-colonialism in occupied Palestine.

“I’m disappointed that the Harvard Law School would let this kind of propaganda for a colonial project for accumulation by dispossession be framed as “legal.”

This is not only complicit but simply dishonest,” a student organizer remarked. “Let us be clear, there is a consensus among the international community that Israeli settlements are illegal under international law and a violation of the fourth Geneva Convention,” they added.