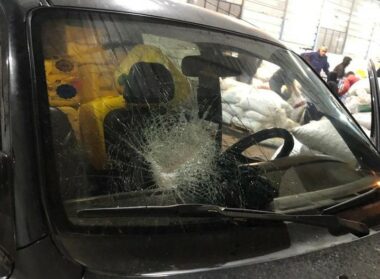 On Tuesday, illegal Israeli colonizers attacked many Palestinian cars on Road #60, Jerusalem-Hebron, and Road #35, causing damage and wounding a woman, while Israeli soldiers abducted six Palestinians and closed the main entrances of Beit Einoun and Bani Na’im towns, east of Hebron, in the southern part of the occupied West Bank.

Palestinian medical sources said one woman was moderately injured when the colonizers hurled stones at her car, driving on the street between Hebron and Ethna town.

The colonizers gathered in large numbers on the main intersections and streets around Hebron before attacking the Palestinian cars and obstructing traffic in front of Israeli soldiers who failed to stop them and attacked Palestinians to force them away.

The soldiers also abducted five Palestinians near Hebron city’s northern road and the Tahrir junction in the southern part of the city.

Furthermore, the soldiers invaded and ransacked many stores in the Tahrir Junction and Sinjer areas before confiscating surveillance recordings and equipment, leading to protests.