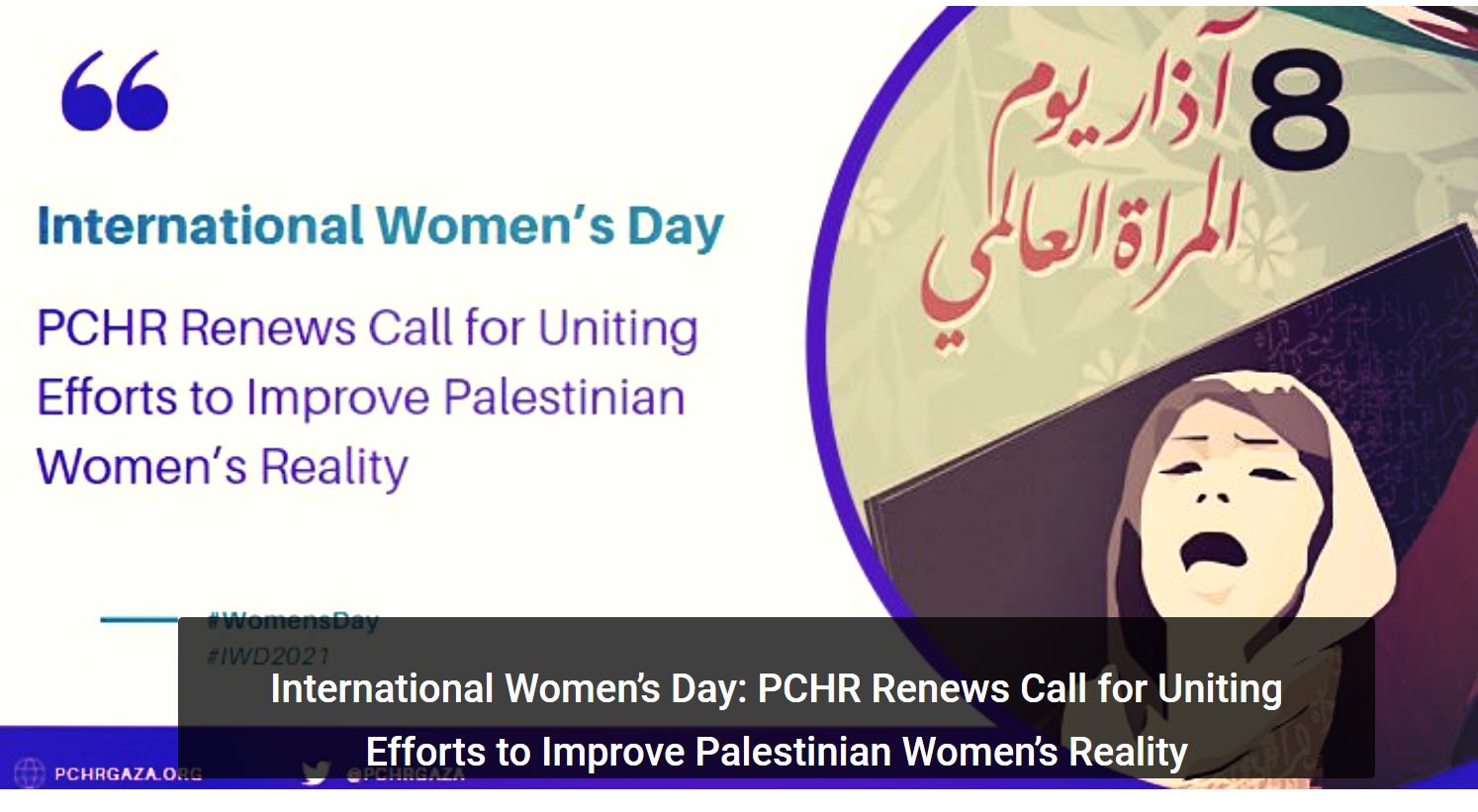 The Palestinian Center For Human Rights (PCHR): March 8th marks International Women’s Day, which was proclaimed by the United Nations General Assembly in 1977, to ensure that all women all over the world enjoy their rights guaranteed by international law. This year, we celebrate this occasion in peculiar times as the pandemic complicated and worsened women’s conditions across the occupied Palestinian territory (oPt) socially, economically, and in terms of their health. Meanwhile, other factors that undermined women’s rights before the pandemic continued to exist as did their implications on women’s lives, including the occupation and the Palestinian internal division.

The Israeli occupation upheld its practice of committing a multitude of violations against Palestinians, particularly women who – as a group- have paid a hefty price for its practices, especially the (39) women who are imprisoned in Israeli prison – Damon. Despite obligations under the Fourth Geneva Convention and Protocol I of 1977 to ensure the provision of care and aid for male and female prisoners as much as they need, Israeli Prison Service deprived them of preventive and safety means such as disinfectants and cleaning materials and sanitizers. Also, Israeli Prison Service did not provide any guidelines that protect prisoners from contracting Covid-19.

With respect to the internal Palestinian level, Covid-19 significantly affected women’s health, economic, social, and legal conditions, as precautionary measures taken by the Palestinian government to curb the outbreak of Covid-19 pandemic increased women’s suffering and burdens. Also, many women were adversely affected by the pandemic after losing their work and sources of income. With regard to health and the pandemic, according to the Palestinian Ministry of Health (MOH), more women than men were infected with Covid-19 in Palestine. Additionally, women and girls’ access to treatment and medical services became more complicated in light of Covid-19 outbreak, as many health resources have been diverted for emergency and urgent cases. As a result, women’s access to sexual and reproductive and maternal health services was negatively affected, mainly in light of the scarcity of health resources particularly in the Gaza Strip.

The impact of the pandemic was not solely on the health or economic wellbeing of women, as domestic violence soared during the lockdown period. Official statistics conducted by the Ministry of Women Affairs indicate that domestic violence significantly increased during the lockdown imposed by the Palestinian government. However, mental violence was the most documented, which reached (55%) of the total number of reported cases of

violence against women. In addition to economic violence (53%), social violence (27%), verbal violence (24%), and physical violence, that increased during the Covid-19 pandemic.

Surveys have indicated that (88%) of women with disabilities were subjected to various kinds of gender-based violence, such as economic, social, physical, mental, and verbal violence, and that (47%) of women sought protection during the pandemic. PCHR’s statistics indicated that during 2020, PCHR provided (2,399) legal consultations, and documented the killing of (5) women in the oPt on grounds of gender-based violence; (3) in the West Bank and (2) in the Gaza Strip.

With the deterioration of the economic, social, and health conditions of women caused by the Covid-19 pandemic, attempts to infringe on and restrict public freedoms appeared as a new travel restrictions against women were issued in a judicial circular by the Higher Sharia Court Council on 14 February 2021. This decision imposed restrictions on women’s right to travel, which constitutes a serious violation of public freedoms; the decision was widely rejected by PCHR and other civil society organizations and succeeded in having it amended.

As the year 2021 entered, democratic hopes were reignited after the Palestinian president, Mahmoud Abbas, issued a law by decree calling for general elections in the West Bank, including occupied East Jerusalem, and the Gaza Strip. Thereby, calls for enhancing women’s political participation renewed, demanding that Palestinian women have fair representation in decision-making roles and hoping that the elections will bring an opportunity for collaborative work to pressure decision makers to eliminate all forms of discrimination against Women. Another goal for the women’s rights movement is to have fair laws for women’s rights, that are applicable across the oPt. It is also imperative to have appropriate policies that ensure the integration of Palestinian women into senior roles in private and public institutions, in order to empower their resilience through the upcoming elective lists.

PCHR congratulates Palestinian women on the occasion of the International Women’s Day and renews its support for women wherever they are.

PCHR asserts that women live through harsh humanitarian conditions, particularly during the pandemic, and as a result of the division and Israeli occupation. Thereby, PCHR emphasizes the need to offer Palestinian women and girls protection, and demands: