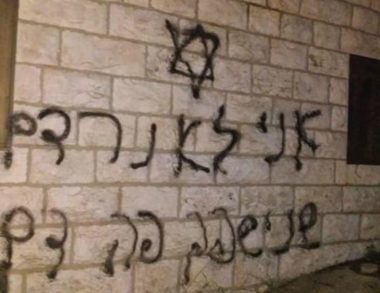 A group of fanatic illegal Israeli colonists invaded, on Wednesday at dawn, the town of Beitin, east of the central West Bank city of Ramallah, and write graffiti calling for “spilling blood.”

Local sources said the colonists infiltrated into the town, and wrote graffiti on many walls, and added that some graffiti said, “I will not leave until blood is spilled here,” and “the lives of our soldiers are more important than the lives of our enemies.”

The sources added that many locals noticed the invading colonists and chased them out of the village.

The incident comes just one day after an Israeli soldier, identified as Amit Ben Ygal, 21, was killed when the army invaded Ya’bad village, southwest of Jenin city. in the northern West Bank, after the army invaded it.