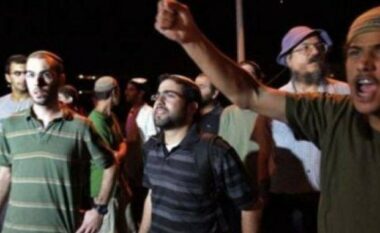 A group of illegal Israeli colonizers attacked and injured, Wednesday, a Palestinian child in Hebron city, in the southern part of the occupied West Bank.

Aref Jaber, a resident of the Shuhada Street in the center of Hebron city, said the colonizers chased his nephew, Abdul-Majid Hammouda Jaber, 12.

He added that the child was running away from the colonizers before running into a concrete wall, leading to moderate wounds to various parts of his body, including the head and face.

Palestinian medics rushed to the scene and provided the child with first aid before moving him to the Hebron governmental hospital for further treatment.

In related news, dozens of colonizers attacked Palestinian cars on the main Jenin-Nablus road, in addition to the junctions and roads between Sielet ath-Thaher and Burqa town, north of the northern West Bank city of Nablus, causing damage.

Furthermore, dozens of illegal settlers, accompanied by soldiers and police officers, invaded the courtyards of the Al-Aqsa Mosque in occupied Jerusalem, and conducted provocative tours, while Israeli soldiers attacked many Palestinians to force them out of the holy compound.