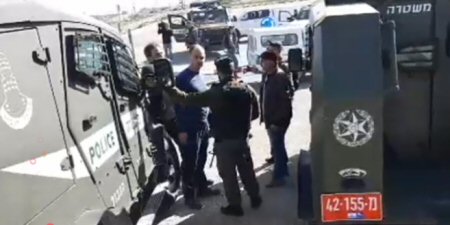 Activists, accompanied by Israeli and international supporters, are shutting down the recently opened Eastern Ring Road near Jerusalem, which features separate lanes for Palestinians and Israeli settlers, divided by a wall.

A few dozen activists have closed the gates to the newly opened road, and are raising banners to protest apartheid and Israeli attempts to expand and cement control over the West Bank and Jerusalem.

Two protesters have been abducted and 4 protesters were injured at the time of this report.

The road, which stretches between Road 437 and Road 1, inside the West Bank, features two separate lanes divided by a concrete wall – one for Israeli settlers and the other for Palestinians. While the Israeli lane allows settlers quick and easy access to the center of Jerusalem, the Palestinian lane is designed to separate Palestinians off through an underpass, so as to not disturb settler traffic into the city.

According to the PNN, construction of the road is planned to continue to the south, further entrenching the two separate and unequal systems of transportation in the West Bank.
The Palestinian part is designated to eventually connect Ramallah to Bethlehem. This plan will enable Israeli authorities to block Palestinians commuting from the south of the West Bank to Ramallah from accessing Road 1, which leads to Jerusalem. By doing so, the Israeli checkpoint between the West Bank and Jerusalem, which bars Palestinians access to their capital, could be moved several miles to the east, past the Ma’ale Adumin, Mishor Adumim, and Kfar Adumim settlements, in effect annexing them to Jerusalem.

Palestinians fear this is part of Israel’s Greater Jerusalem plan, which includes the expansion of the Ma’ale Adumim settlement into the E1 area, and is related to the displacement of Bedouin communities in the area, including Khan Al Ahmar and Jabal Al Baba.

Palestinian activist Munther Amira said, “Any shame the Occupation may have had of its apartheid policies is now completely gone with this road. We must not and will not allow for their plan of ethnic cleansing in the outskirts of Jerusalem.”