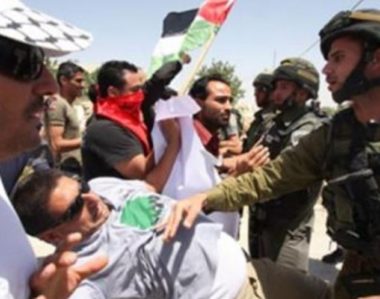 Israeli soldiers abducted, Wednesday, a Palestinian and an Australian peace activist during a nonviolent protest near Anata town, northeast of occupied East Jerusalem.

The protesters carried Palestinian flags and chanted for ending Israel’s segregation and apartheid policies against the indigenous Palestinians in their homeland, before the soldiers fired many concussion grenades at them, and assaulted several nonviolent protesters. The soldiers then abducted one Palestinian and one Australian.

The road is part of Israel’s illegal colonialist apartheid policies, aiming at completely controlling occupied East Jerusalem, as part of the illegal E1 colonialist project which includes the destruction of Bedouin communities and their displacements, to surrounded Jerusalem with a belt of illegal colonies, military bases and police centers on indigenous Palestinian lands.