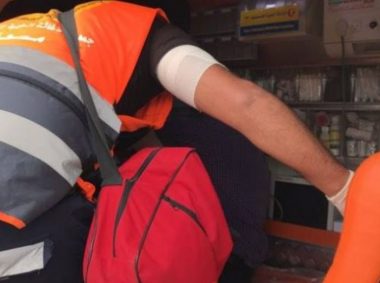 Medical sources have reported, Sunday, that a Palestinian man suffered moderate wounds, after an Israeli colonist rammed him with his car, east of Hebron, in the southern part of the occupied West Bank.

The sources identified the wounded man as Ghassan al-Mohtasib, 35, and added that he was moved to the Hebron governmental hospital for treatment.

The incident took place near the al-Baq’a Junction, on the bypass road #60, used by both Israeli colonists and Palestinians. Like numerous previous incidents, the driver fled the scene.

On Saturday evening, a Palestinian child was injured, after a police officer rammed him with his car, in occupied Jerusalem, and fled the scene.