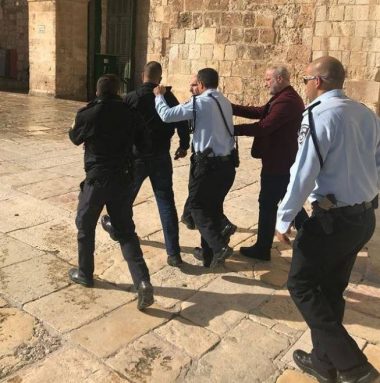 The Palestinian Detainees’ Committee has reported that Israeli soldiers abducted, Monday, 21 Palestinians, including children, during extensive and violent searches of homes, in several parts of the occupied West Bank.

The Committee stated that the soldiers abducted four Palestinians, including two siblings, identified as Fadi and Moneeb Ghneimat, in addition to Nader ‘Oweidat and Saif Abu Zeina, in Hebron governorate in southern West Bank.

In Ramallah, in central West Bank, the soldiers abducted a reporter, identified as Ahmad Majdi al-’Arabid, who works for the al-Hurriya Radio, in Ramallah, and assaulted his brother, Amjad, also a reporter, after invading their homes.

The soldiers forced the family in one room and took away their mobile phones while violently searching the properties.

In addition, the soldiers abducted a child, identified as Mohammed Iyad Burnat, 14, from his home in Bil’in village, west of the Ramallah.

His father, Iyad Burnat, a known nonviolent activist against the Israeli Annexation Wall and Colonies, said the soldiers invaded his home, and abducted his son.

|Israeli Soldiers Abduct Palestinian Minutes After His Release From Prison|

It is worth mentioning that Iyad is currently in Istanbul – Turkey, where his other son, Majd, is hospitalized for further specialized treatment from wounds, he suffered three years, after an Israeli soldier shot him in the leg, causing nerve damage.

In occupied Jerusalem, the soldiers abducted Samer Mojahed, who works at the Manuscript Department of the Al-Aqsa Mosque. He was forced out of the mosque compound before the soldiers moved him to an interrogation facility.

Dozens of soldiers, and mounted police officers, have also been deployed in Jerusalem, especially in Sultan Suleiman Street, by the Old City walls.

The soldiers stopped and interrogated many Palestinians while inspecting their ID cards, and installed roadblocks in various main roads in the city, especially near Sheikh Jarrah and Wadi Al-Jouz neighborhood, and in front of the Rashidiyya School.

At the time of this report, sixteen of the abducted Palestinians have been identified as: