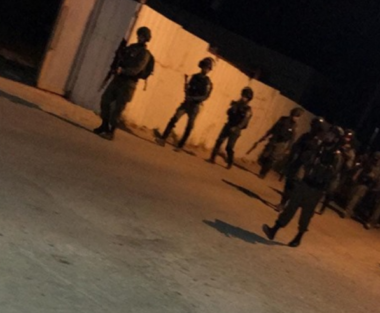 Israeli soldiers abducted, on Thursday at dawn, twenty-five Palestinians from their homes in Hizma town, northeast of the occupied Palestinian capital, Jerusalem, in the West Bank.

The WAFA Palestinian News & Info Agency has confirmed that among the abducted Palestinians are several teachers, fathers, and their sons, in addition to former political prisoners.

It added that the Palestinians were abducted after the soldiers stormed and violently searched dozens of homes in the town and interrogated the residents.

The soldiers surrounded and isolated the town during the invasion, violent searches of homes, and the abduction of the Palestinians.

It is worth mentioning that Hizma is subject to repeated Israeli violations, including abductions, breaking into homes, and field interrogations of the families, especially over the last few weeks.

On Wednesday at night, the soldiers injured three young Palestinian men, including one who suffered life-threatening wounds, in Qalandia refugee camp and abducted two Palestinians in Kafr Aqab, north of Jerusalem.

On Wednesday evening, Illegal Israeli colonizers fired many live rounds at Palestinian homes in the Sheikh Jarrah neighborhood in Jerusalem.

The Palestinians who were abducted in Hizma town have been identified as: