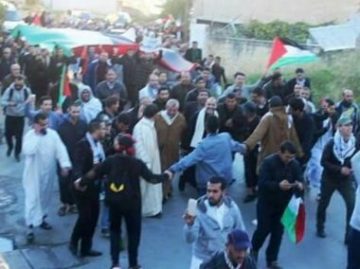 Israeli soldiers attacked, Friday, nonviolent Palestinian protesters, marching against the ongoing Israeli occupation, and oppression, and the illegal U.S. recognition of occupied Jerusalem as the unified capital of Israel.

The protests started on Friday afternoon, before the soldiers resorted to the excessive use of force, and fired injured many Palestinians.

In Nablus, in northern West Bank, the soldiers assaulted dozens of protesters, especially in Iraq-Burin village, during the funeral ceremony of Ali Omar Qeino, 16, who was killed, Thursday, when a soldier shot him wit a live round in the head.

Medical sources said one Palestinian was shot with a gas bomb in his shoulder, and two others with rubber-coated steel bullets, in the al-Lubban ash-Sharqiya village.

Armed colonialist settlers also attacked homes in the village, before the locals managed to kick them out of the village.

In Bethlehem, the soldiers attacked nonviolent protesters, and abducted two Palestinians, including Hasan Faraj, a member of Fateh Revolutionary Council.

The soldiers also attacked protesters near the entrance of al-Biereh city, in the Ramallah and al-Biereh governorate, in central West Bank, and shot a young man with a Toto expanding bullet, causing a moderate injury.

Also in Ramallah, the soldiers assaulted nonviolent protesters in Budrus village, west of the city, and fired many gas bombs, rubber-coated steel bullets and live rounds, and assaulted many reporters.

Protesters were also attacked in Hebron, in the southern part of the occupied West Bank, and the soldiers fired many gas bombs, concussion grenades and rubber-coated steel bullets, causing several injuries.

In the besieged Gaza Strip, the soldiers, stationed across the border fence, opened fire on dozens of protesters, marching on their lands, close to the eastern border of the coastal region.

The soldiers fired many live rounds, and rubber-coated steel bullets, wounding at least one young man, with a live round, and causing dozens to suffer the effects of teargas inhalation.