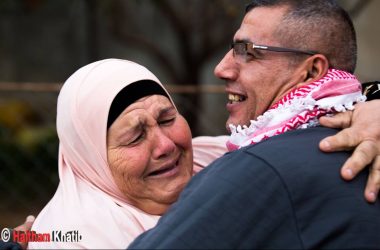 Israeli soldiers attacked, Friday, the weekly nonviolent procession against the Annexation Wall and Colonies, in Bil’in village, west of the central West Bank city of Ramallah, and injured many protesters.

The Popular Committee against the Wall and Colonies in Bil’in said the soldiers resorted to the excessive use of force against the local and international nonviolent protesters.

It added that the army fired gas bombs and concussion grenades, causing many to suffer the effects of teargas inhalation.

The weekly procession started from the center of the village, before the nonviolent protesters marched towards the Annexation Wall which separates them from their lands, and chanted against the ongoing occupation, in addition to calling for more steadfastness, national unity and the release of all detainees.

In related news, the Israeli Authorities released nonviolent activist, Ashraf Abu Rahma, after holding him for three months, and forcing him to pay a 5000 Israeli Shekels fine.

Ashraf is the brother of Bassem Abu Rahma was killed at age 31 on April 7th, 2009, when an Israeli soldier shot him with a high-velocity teargas bomb directly in the chest, while his sister, Jawaher Abu Rahma, asphyxiated to death, on January 1st 2011, after the soldiers fired dozens of gas bombs at nonviolent protesters.

It is worth mentioning that in July 2008, Ashraf was abducted by the soldiers, who cuffed and blindfolded him, before a soldier aimed at his leg, from a very close range and shot him.