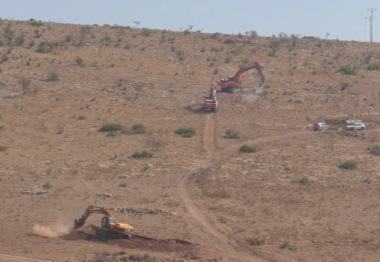 Dozens of Israeli soldiers, accompanied by bulldozers, invaded Palestinian lands in the al-Marmala area, in the West Bank’s Northern Plains, Sunday, and started bulldozing them to pave a new segregated road for illegal colonialist settlers.

He added that many illegal colonialist settlers accompanied the soldiers in the invasion and the bulldozing of the Palestinian lands.

It is worth mentioning that the Northern Plains, as well as many areas in the West Bank’s Jordan Valley, are subject to constant Israeli violations, including the demolition of homes, sheds and barns, and the bulldozing of Palestinian lands.

Israel has also frequently confiscated the Palestinian lands in these areas, to use them for the construction and expansion of its illegal colonies, in addition to using some of them as “closed military zones.”

The army also frequently displaces the Bedouins and farmers in the area, to conduct live-fire military drills, including the use of explosives, and in the process devastating and destroying the lands.

Many Palestinians, including children, have been killed, or injured, by Israeli army fire during these military drills, in the Jordan Valley and several parts of the West Bank, in addition to being killed by explosives dropped by the military during these drills.