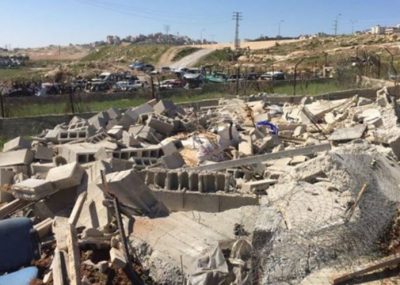 Israeli soldiers demolished, on Tuesday morning, fourteen apartments, in addition to an agricultural room and four walls, in “Sheikh ‘Anbar” area, in Zaim village, east of occupied East Jerusalem, reportedly for being built without permits.

Dozens of soldiers, and personnel of the Jerusalem City Council, invaded the village and demolished three residential buildings and one flat.

The demolished properties are owned by Othman Abu Sbeitan, Ahmad Shanbar, and Ayman ad-Daya. One of the buildings was ready for families to move in, and one was still under-construction, in addition to an already inhabited building where a family of eleven lived.

Furthermore, Israeli bulldozers demolished five walls belonging to the families of ‘Alqam, Natsha and al-’Abbassi, in addition to demolishing an agricultural shed, owned by members of Alqam family.

While Israel continues to build, and expand, its illegal colonies in the occupied West Bank, especially in and around occupied East Jerusalem, the Palestinians remain restricted from building and expanding their properties under various allegations, in addition to the very high fines they encounter, and the extremely expensive construction costs.

Some families in occupied Jerusalem have even self-demolished their homes, after losing all appeals, in order to avoid receiving the excessively high invoices from the City Council, demanding them to pay for the costs of the destruction of their own properties.