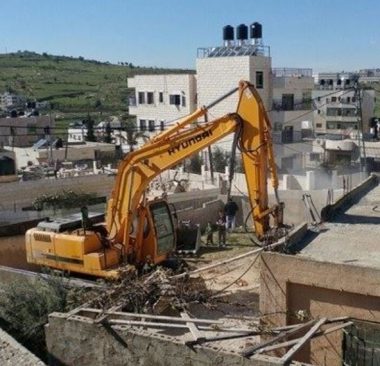 A Jerusalem family from Beit Hanina neighborhood, north of occupied East Jerusalem, demolished its own home, Tuesday, to avoid excessively high penalties and fines, imposed by the City Council, in addition to the extremely expensive bills it would pay, if the city demolished their property.

The family of Hafeth Rajabi said it built the home fifteen years ago, and that the property has been providing shelter to several persons.

Linda Rajabi, the owner of the home, said the family has no other option but to demolish its own home, because the bills the Council would send after demolishing the home would be as high as 250.000 Israeli Shekels.

“This was a very difficult, heart-breaking, decision that we had to make,” she stated, “We lived here for 15 years, now we are homeless, but this is our land, and we will never abandon it.”

She added that the family has already been paying high fines, in addition to lawyers’ costs, and engineers to obtain all needed licenses, but the City Council always denied the applications, and moved to demolish the property.

Earlier Tuesday, Israel demolished fourteen apartments, in addition to an agricultural room and four walls, in “Sheikh ‘Anbar” area, in Zaim village, east of occupied East Jerusalem, reportedly for being built without permits.

On Monday, residents Fayez Abdul-Latif Ja’abees and his brother Suleiman had to demolish their homes, also to avoid the high fines and fees, after the City Council denied all appeals.

The two homes were built three years ago, each of 150 square/meters, and housed sixteen Palestinians, including twelve children.