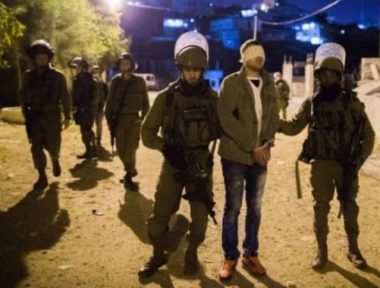 The Palestinian Prisoners’ Society (PPS) has reported that Israeli soldiers shot and injured, on Monday at dawn, two young Palestinian men Nablus, and abducted two others in Salfit.

Medics provided the wounded Palestinians with the needed medical attention, and moved them to Rafidia hospital.

Furthermore, the soldiers abducted, on Sunday evening and Monday at dawn, seven Palestinian children, including two children, 10 years of age, and summoned one Palestinian for interrogation, in the West Bank governorate of Bethlehem.

On Sunday evening, the soldiers assaulted several young Palestinian men and women near the Al-Aqsa Mosque, especially at the Council Gate and the Chain Gate of the holy site, and abducted twelve of them, but released one later.