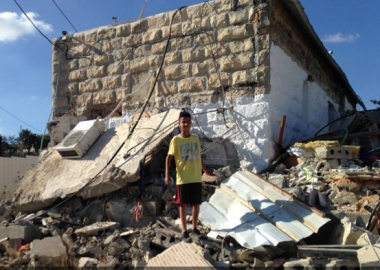 Resident Sa’id al-Qassas, the owner of the partially demolished building, said the soldiers, accompanied by military bulldozers, invaded the area and forced him and his family out of their property, before demolishing a bedroom, toilets and a living room.

He added that his home, built on his own land, is close to the Gilo Israeli colony, largely built on private Palestinian property.

Al-Qassas stated that the soldiers prevented him and his family from removing their furniture out of the property, while Jerusalem City Council employees partially removed furniture before demolishing the rooms.

He also said that the demolition and the rubble covered the remaining part of the home.

It is worth mentioning that, nearly 18 years ago, the soldiers demolished 80-square meters of his home, consisting of a living room, a bedroom and a bathroom.

In 2014, the Israeli authorities imposed a fine of 20.000 Shekels on the family for not demolishing their property, and later invaded the area and photographed the property’s interior and exterior.

Al-Qassas said that the today’s destruction of his property was carried out without a prior notice.