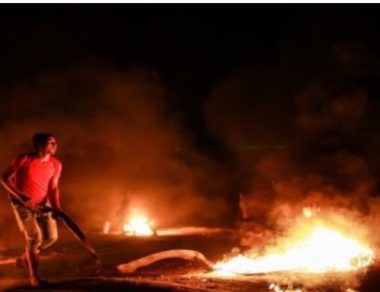 Israeli soldiers shot, on Sunday evening, three Palestinians east of Jabalia, in the northern part of the besieged and improvised Gaza Strip.

The Palestinian Health Ministry in Gaza has reported that the three suffered moderate wounds, and were rushed to the Indonesian Hospital, in Beit Lahia.

In addition, Israeli daily Haaretz quoted the Israeli army claiming that fired a missile at a “Hamas outpost, after an explosive device was thrown over the border fence, in northern Gaza.”

On Saturday evening, Israeli drones fired two missiles into a site near the perimeter fence, in the eastern area of Central Gaza.

On Friday, the 49th week of Great March of Return and Breaking Siege on Gaza, the army injured 83 Palestinian civilians, including 23 children and one woman, in addition to three Paramedics, and one journalist.