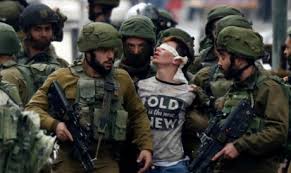 Israeli troops abducted, on Monday afternoon, a Palestinian mother and her son from the Beit Hanina neighborhood in the internationally-recognized occupied East Jerusalem, in the southern West Bank.

Local media sources in the city said that a force of Israeli police broke into the home of Elham Abu Sobaih in Beit Hanina, just north of occupied East Jerusalem,  and that police personnel inspected the home thoroughly before they abducted Elham and her son, Ahmad.

The sources added that Elham is a community leader, who is in charge of a Palestinian women’s group, called the Society for Women’s Development and Empowerment, and that Elham herself, has been abducted by Israeli forces several times before.

The sources noted that Elham’s previous abductions were apparently because of the local social activities for women, inside her own community.

Israeli troops’ abductions of Palestinian residents, throughout East Jerusalem, has notably escalated over the past couple of years, with the United States having recognized the Arab-Palestinian East Jerusalem, as the capital of Israel.