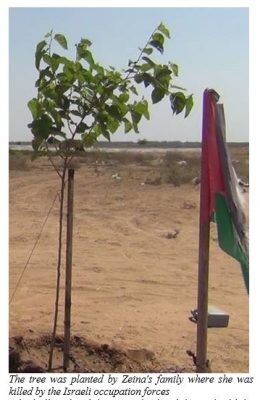 “Our life has turned upside down since my mother’s death. With her passing, we lost the backbone of the house.” Hani Salem Elomor is a married father of 3 children and resident of El Elfokhari neighborhood, Khan Younis, whose mother Zeina was killed by the Israeli occupation forces in 2016 when she was working on the family’s farmland.

Zeina was solely responsible for Hani and his six siblings and the family’s income is based on the 2 dunums of land they own and where they plant wheat, which is located in Elfokhari neighborhood, about 350 meters from the borderline line with Israel. Supposedly, the farmland is outside of the buffer zone implemented by the Israeli occupation forces, stretching from the Israeli border 300 meters into the Gaza Strip. The buffer zone is an area prohibited to Palestinians, which is illegal under both Israeli and international law.

According to the United Nations Office for the Coordination of Human Affairs (OCHA), the buffer zone takes up 17 percent of Gaza’s total land, making up to 35 percent of available farmland unsafe for Palestinians to use, with the areas nearest the border fence being the most restricted.

It is harshly affecting the livelihood of tens of thousands of Gaza farmers, who rely heavily on agriculture to provide for their families. In addition, the Israeli occupation forces regularly enforce the buffer zone and nearby areas with live fire, which is what Zeina became a victim of.

In the evening of 05 May 2016, Hani received a phone call from his brother Monzer, who informed him that their mother got wounded from a shell by the occupation forces and that she was on her way to the Gaza European hospital.

“I immediately rushed to the hospital and when I arrived there, I could see my family members getting into the emergency room. I followed them and saw my mother’s dead body lying on one of the beds with her face covered. Unconsciously, I uncovered her face and saw the blood covering her neck, shoulder, and right hand. The doctors informed me that she was killed on the spot by the Israelis”, Hani tells in vain.

Zeina was collecting hay on her farmland and filling it into bags to move it to the house, when the occupation forces fired a rocket at her, as her relatives that accompanied her tell. In the place of the incident there were a number of other farmers working on their farmlands.

The area is very flat, the sight is obvious, and the attack happened during day time, which is a clear evidence for the arbitrariness of the killing. “There is an Israeli military tower east of the land, about 350 meters away, so the occupation forces could see with their bare eyes that my mother was a civilian, working on her land to provide her family with an income.

They shot her for no reason”, Hani emphasizes. “Ever since the end of the latest war on Gaza, Israel allowed farmers to cultivate this zone using short crops that do not grow higher than 80 centimeters, such as wheat and barley, as it forbids them from establishing greenhouses or buildings there”, Hani highlights.

Enforcing the buffer zone by means of live fire constitutes a war crime, as codified in the Fourth Geneva Convention and the Rome Statute, prohibiting the targeting and severe injuring or killing of a civilian or protected person. However, Israeli troops typically enforce the buffer zone with live fire which often results in, inter alia, the direct targeting of civilians and/or indiscriminate attacks.

A reminder was sent on 26 April, 2017 regarding the complaint and PCHR received a response that the incident is under treatment by the Israeli military prosecution for operational affairs.

“A year later, day by day we still go to our land and work the same way as if our mother was still among us. The occupation forces tried to frighten us several times, but they will not succeed and we will never give up our land. It belongs to us and we will not lose our sole source of income”, Hani emphasizes.  “Until today, we don’t know the reason why she was killed; my mother was killed for nothing. We hope for accountability, even though it has been a year since the incident happened and no progress has been made in the case.”