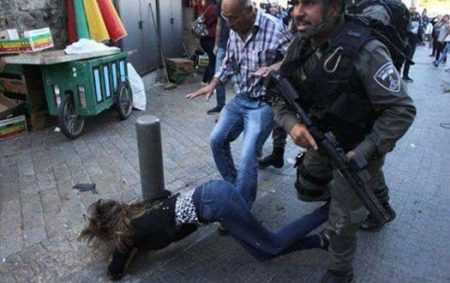 Israeli occupation forces and police escalated their attacks against journalists and media, culminating in a wave of attacks on at least 14 journalists in East Jerusalem on Saturday, the 29th of April, 2017.

An Israeli police cavalry unit attacked several journalists, injuring them and destroying their equipment, as well as preventing them from covering a peaceful assembly organized in Jerusalem, in solidarity with the Palestinian detainees who have been on hunger strike since  4/17/17.

For instance, this attack injured the photographer of (AFP) Ahmad Kamal Gharabli with a break to his rib, besides smashing two of his cameras, after being harassed and knocked down by a policeman from the cavalry unit.

Moreover, according to the PNN, a photographer for Reuters, Ammar Jamil Awad, was also beaten with a riffle by an Israeli police officer, causing a slight fracture in his arm while he was trying to help his colleague, Gharabli, get up on his feet.

More than one journalist fell down, after being attacked by the cavalry unit, leading to several injuries and the destruction of some equipment.

Ahmad Kamal Gharabli reported to MADA: ”Around 17:00 of Saturday 4/29/17… I was at the Damascus Gate in the old city of East Jerusalem, to cover a peaceful assembly organized in solidarity with the mass hunger strike by Palestinian prisoners. Meanwhile, a troop of Israeli Cavalry unit arrived to disperse the demonstrators. At that time, I was attacked by one of the Israeli cavalry unit rushing towards me. I fell on the ground whilst carrying two cameras that broke”.

He also added, ”I headed to Kupat Holim and received the first aid; they advised me to have a hospital check/examination. In the evening, I headed to Al-Makased hospital. The x-ray showed that I had a fracture in the fourth rib, rather than other bruises in different parts of my body.”

Such attacks reveal deliberate, brutal and systematic measures against Palestinian journalists and media, by Israeli authorities, that took place only few days before the World Press Freedom day, which coincides the 3rd of May, each year.

The Palestinian Center for Development and Media Freedoms (MADA) condemns such deliberate, indiscriminate, brutal and oppressive operation that targets Palestinian journalists who were covering a peaceful assembly in East Jerusalem. It should be noticed that, such violations expose the persistent and systematic policies of the Israeli occupation through various vicious means and brutal measures taken; that only aim to conceal the real situation and discriminatory policies against Palestinians through the prevention of coverage and deliberately targeting journalists.

Finally, MADA calls for the urgent prosecution of all perpetrators of these attacks, who are not subjected to accountability, and noting that sraeli occupation forces have committed hundreds of attacks against journalists and media in Palestine, over the past few years.

Photo: Reporter for the al Kufiya channel, Nawal Hijazi, lying on the ground after being pushed by the Israeli police. (MADA Facebook)