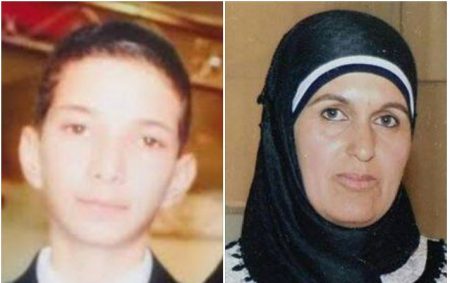 Dozens of Palestinians participated, on Tuesday at dawn, in the funeral ceremonies of a Palestinian woman, and a teenage Palestinian boy, in Jabal al-Mokabber and Um Touba villages, in occupied Jerusalem, under strict Israeli restrictions and preconditions.

Abu Teir was killed by Israeli army fire on March 8, 2016, in Jerusalem’s Old City after the army alleged she “attempted to stab soldiers.” The soldiers prevented Palestinian medics from approaching the seriously injured woman, and she died of her wounds.

“The Israeli occupation army killed my mother just for suspecting that she intended to carry out an attack,” her son said, “They shot her in cold blood, then they left her to bleed to death – it seems that was not enough as they held her body for more than two months.”

|Jerusalem Family Buries Its Son Seven Months After He Was Killed|

He added that approximately eight persons participated in the funeral ceremony in Um Touba village mosque, and that the burial was amidst extensive Israeli military presence and tight restrictions.

The son also said that Israel placed preconditions limiting the number of funeral participants, forbidding them for taking any pictures or videos, and to pay 20.000 Israeli shekels bail.

In related news, the family of the slain child, Mo’taz Ahmad Oweisat, 16, held the funeral and burial ceremonies, also on Tuesday at dawn, in the local graveyard in Jabal al-Mokabber, south of Jerusalem.

The child was killed seven months earlier, on October 17, 2015, near the Armon Hanetziv illegal Israeli colony, built on Palestinian lands in Jabal al-Mokabber, allegedly after he “attempted to carry out a stabbing attack.”

The soldiers stopped the teen at a roadblock, and started questioning him, while examining his ID cards, and claimed that “they discovered that he carried a knife.”

The family had to wait near the graveyard for many hours, and the soldiers kept attacking locals who gathered there, before eventually allowing 45 persons to participate in the burial ceremony, under extensive military deployment and strict security measures.

Lawyer Mohammad Mahmoud of the Ad-Dameer Prisoners’ Support and Human Rights Association, said he hopes the bodies of all slain Palestinians would be transferred back to their families before the upcoming holy Muslim month of Ramadan, as recommended by the Israeli High Court.