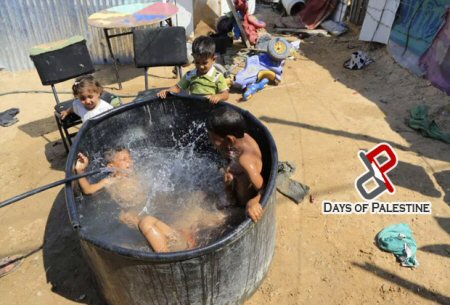 During the current heatwave, Gaza residents, who do not have electricity to cool themselves off, due to Israeli siege, are struggling to survive.

Sami, a medical intern in the Gaza Strip, is struggling to sleep, due to the heatwave, which is roasting the region, and where temperatures have been soaring to 37°C (98°F). The heat in his room is overpowering, and the mosquitoes do not help, either. But, due to the ongoing electricity crisis, he cannot cool himself off, or even plug in the device that wards off the biting insects.

“Sometimes, I go around flipping on different sides of my bed for an hour before I can fall asleep. It is humiliating,” Sami told an Israeli newspaper.

According to Days of Palestine, Gaza residents refer the reason for the devastating power crisis in the Gaza Strip to the strict Israeli-Egyptian and internationally backed siege, which turns basic goods, services and actions into luxuries. The normal strategies for cooling off in the summer heat — including showers, swimming, air conditioning and electric fans — have all but disappeared. Even drinking water is an increasingly rare commodity.

Electricity is only hours on

The average Gazan enjoys either four to six, or two to three hours of electricity per day. Residents have no idea when the power will come on. So, when it does, they have to drop what they are doing and rush to complete tasks that require electricity.

“When the power comes, for two to three hours, you run like a madman to manage to recharge everything, pump water, shower, sleep, work, get online, cool down and breathe, all in two hours,” said Ali, a 30-year-old journalist in Gaza. The power can come on in the middle of a workday, or late at night when everyone is sleeping.

During the current power crisis, Ali added, “cold water becomes a luxury, a wish, a dream, a desire. No power means no fridge, means no cold water.”

Khaled, a father of three and a humanitarian worker also complained about not being able to protect his family from the heat.

“My youngest child is 8-months-old. Last night, he could not sleep, so we just kept fanning him. We used a piece of paper to fan his face, and the minute we stopped, he would wake up,” he said. “My wife goes to do the household things at odd times. You find her up very early in the morning turning on the washing machine because the power just came on. Her sleep schedule is entirely off.”

The residents of Gaza have suffered electricity woes ever since the Israeli occupation placed its strict siege, after the Palestinian Islamist movement, Hamas, which won general elections, ended one and a half years of political and security chaos, and began controlling the coastal enclave in mid 2007.

Up until a few months ago, Gazans received power in eight-hour intervals — eight hours on and eight hours off. That was enough, they said, to sustain a semblance of normalcy and keep the Strip’s infrastructure running.

The current crisis began when Gaza’s only power station shut down in April, due to a lack of fuel. The Palestinian Authority (PA), which is run by Fateh leader Mahmoud Abbas, asked Israel to stop electricity supplies for Gaza.

The crisis deepened when the PA, which has been footing the bill for a portion of Gaza’s electricity that is provided by Israel, decided to cut the payments by 35 percent — part of a series of measures meant to force Gaza residents to revolt against Hamas.

At the behest of the PA, Israel has been gradually reducing power to the Strip. As of Sunday, Israel has cut its supply to Gaza from 120 megawatts to 48.

Suhair Zakkout, who works for the Red Cross, said the crisis can “really make every single minute of life a struggle.”

She described a case of a boy suffering from asthma who has to be rushed to the hospital up to five times a day.

When he’s hooked up to the nebulizer that helps him breathe, his mother “can easily” handle his care at home, Zakkout said. But, without power, every time he has an attack, they have to head to the hospital.

She also highlighted the fact that Gaza’s children, who are on summer vacation, have little to do with themselves. The beach is the usual summertime gathering spot but, now, the authorities in Gaza have closed off large portions of it. Without electricity, the sewage treatment plants are not working properly, and raw waste is being pumped into the sea.

For three days, last week, Gaza celebrated the holiday of Eid al-Fitr, generally a time when families gather and exchange gifts. But, with elevators out of commission, the elderly and disabled were unable to visit with families who live in high-rise apartments, Zakkout said.

She compared the lack of the electricity to being sick. “You only realize how important the antibiotic is when you do not have it.”