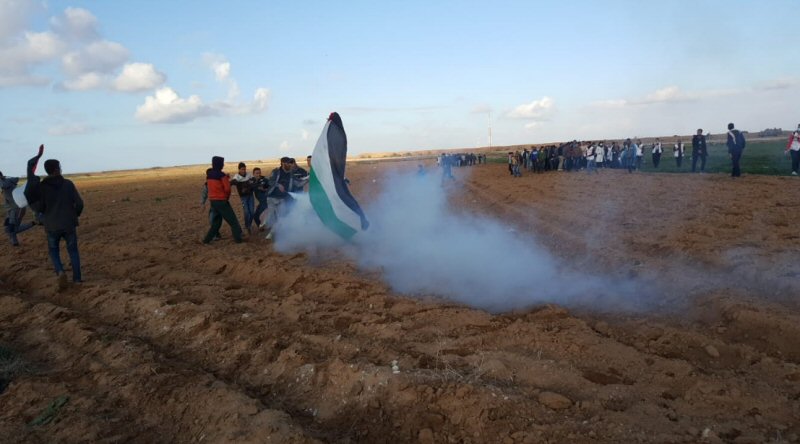 Israeli forces continued with systematic crimes, in the occupied Palestinian territory (oPt), for the week of 20 – 26 December 2018.

As part of using excessive force against the peaceful protesters along the Gaza Strip borders, during the reporting period, Israeli forces wounded 142 civilians, including 30 children, 2 women, 2journalists, and a paramedic.  The injury of 2 of those wounded was reported serious.

As part of targeting the Palestinian fishermen in the sea, the Israeli forces continued to escalate their attacks against the Palestinian fishermen, indicating the on-going Israeli policy to target their livelihoods.  During the reporting period, PCHR documented 12 incidents against fishermen.  As a result, 2 fishing boats were drowned in Rafah Sea in the southern Gaza Strip while fishermen who were in the area managed to save the five fishermen who were on board.

In the West Bank, Qasem Mohammed al-‘Abasi was killed after fire was opened at a car travelled by 4 Palestinian civilians, who lost their way while heading to Ramallah in “Beit Eil” settlement established on the lands of al-Bireh.  . The Israeli forces claimed that the car travelled by Qasem and his friends “sped up towards the soldiers who were at the settlement entrance, so the soldiers thought that the driver intended to carry out a run-over attack.  They then opened fire at the car and wounded those who were inside.”  The initial results of autopsy revealed that Qasem was hit with a bullet that penetrated his back and wounded the main artery and both lungs, causing his death.  This has refuted the Israeli forces’ claims that the car was traveling towards the checkpoint as it was on its way back as confirmed by the eyewitnesses who was with Qasem and survived.

In the same context, during the reporting period 5 Palestinian civilians, including a journalist, were wounded in separate shooting incidents.

During the reporting period, Israeli forces conducted at least 66 military incursions into Palestinian communities in the West Bank and 7 similar incursions into Jerusalem and its suburbs. During those incursions, Israeli forces arrested at least 38 Palestinians, including 4 children, in the West Bank.  Moreover, 18 others, including 2 children and a woman, were arrested in Jerusalem and its suburbs.

In the Gaza Strip, on 25 and 26 December 2018, Israeli forces moved 100 meters into the southern side of the coastline with Israel off “Zikim” Military base, northwest of Beit Lahia in the northern Gaza Strip.  The vehicles started levelling and combing the lands that were previously levelled amidst Israeli sporadic shooting.  Neither casualties nor damage to the property was reported.

As part of settlement expansion and demolitions, on 25 December 2018, Israeli forces levelled 70 dunums in  Amatin village, east of Qalqiliya, in favour of expanding the industrial area in “‘Emanuel” settlement.  it should be noted that 1200 dunums from Amatin village were confiscated for expanding the abovementioned settlement, which was established as an outpost of 22 dunums on the lands of Deiristiya in 1983 and then continued to expand and annex hundreds of agricultural lands of Deiristaya, Jeenasafout and Amatin to become of an area of 1240 dunums, where 3200 settlers live.

On 26 December 2018, Israeli forces demolished a commercial facility used as a car repair shop at the entrance to al-Laban al-Shariqyah village, south of Nablus, claiming it was built without a license in Area C.  The facility belonging to Raja Daraghmah is a yard of 120 square meters and surrounded by a brick wall.

As part of the Israeli settlers’ attacks against the Palestinians civilians and their property, PCHR’s fieldworkers in the West Bank documented 5 attacks that were carried out by the Israeli settlers during the reporting period.  As a result, a shepherd was hit with a stone to the head and sustained a fracture in the skull.  Moreover, dozens of lands were levelled in Ramallah and al-Bireh and Bethlehem, and a mobile house was placed on the lands of Batir village, west of Bethlehem, in a prelude to establish a new settlement outpost in the area.