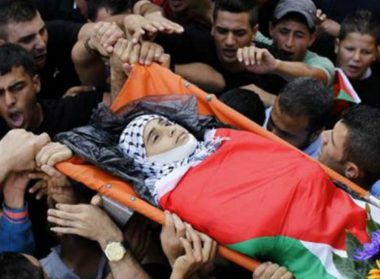 The Palestinian Red Crescent Society (PRC) has reported that Israeli soldiers have killed nine Palestinians, and injured at least 3400 others, in various parts of occupied Palestine, since December 7th.

The Red Crescent said that the soldiers have killed nine Palestinians in the West Bank and the Gaza Strip, and injured 3400 others.

It added that 767 Palestinians have been moved to many hospitals in the West Bank, including Jerusalem, and the Gaza Strip.

This past Friday witnessed the most excessive use of force by the Israeli army, resulting in killing four Palestinians, and injuring at least 367.

On Sunday morning, the soldiers invaded many Palestinian areas, and attacked protesters marching against Donald Trump’s illegal recognition of Jerusalem as the unified capital of Israel, and his intention to move the embassy from Tel Aviv to the occupied city.

Medical sources said many Palestinians, especially schoolchildren, suffered the effects of teargas inhalation in Hebron, in the southern part of the West Bank.

It is worth mentioning that the soldiers have abducted, overnight until early morning hours Sunday, 16 Palestinians, in several parts of the occupied West Bank, bringing the number of abducted Palestinians since December 6th, when the U.S. President Donald Trump made his illegal recognition of Jerusalem as a unified capital of Israel, to 430, including women and children.

Names of Palestinians Killed By the army in December

On December 12, a Palestinian woman, identified as Hamda Zubeidat, 60, died of a heart attack when Israeli soldiers hurled concussion grenades near her, just as she opened her door, in Zubeidat town, north of Jericho.

It is worth mentioning that, on December 6, 2017, a child, identified as Mohammad Saleh Abu Haddaf, 4, died from serious wounds he suffered on August 8, 2014, when Israeli army drones fired missiles at his family’s home, and several nearby homes, in al-Qarara town, north of Khan Younis, in the southern part of the Gaza Strip.

The missile, which struck the family home, killed three family members, identified as Mahmoud Khaled Abu Haddaf, 15, Suleiman Samir Abu Haddaf, 21, and Mahmoud Mohammad Abu Haddaf, 9, and injured at least six others, including Mohammad, who remained in a serious condition until he died from his wounds.