Report: Settlement Expansion Unprecedented amidst International Failure to End It 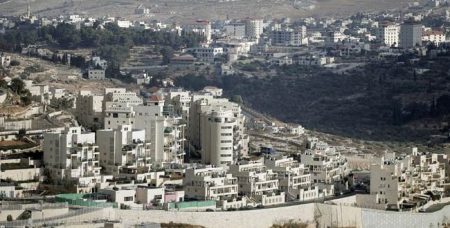 Since the beginning of the year, the West Bank, and especially East Jerusalem, is witnessing an acceleration of settlement construction, the largest in 25 years.

Minister of Defense in Israel, Avigdor Lieberman, said that permits for building settlements in the West Bank, during the first half of this year, was the highest since 1992. He pointed out that 3,651 settlement units have been approved since the first week of this month, of which 671 units are to be implemented soon. Since the beginning of 2017, the construction of 8,345 settlement units has been approved and 3,066 units are under construction. He added that the number of settlers in the West Bank had been increased to ease the overcrowding of settlements in 1948 borders.

During his meeting with US Ambassador to the United Nations, Nikki Haley, Israeli Prime Minister Benjamin Netanyahu said that the application of the Dutch-Belgian model on settlements in the Palestinian territories is a good one (i.e. keeping the ‘isolated’ settlements under Israeli sovereignty), and that he is interested in applying a similar approach to that of areas found in small towns at the border between Belgium and the Netherlands.

Netanyahu put forth this idea at the beginning of 2014, when he held talks led by then US Secretary of State John Kerry, on a framework agreement.  At the same time, he announced in the Knesset that he will not evacuate any settlements in any future agreement with the Palestinians, and that “everyone has the right to live in his house and not to be dismissed.”

The new bill includes measures to free the movement of settlers within these settlements and surrounding roads, as well as allowing the return of settlers to these areas, especially as they remain as they were, when evacuated, and that they remained under the Israeli army control.

Israeli general Yair Naveh, who served as the “central region commander” during the implementation of the disengagement plan, in 2005, and was responsible for evacuating settlements in 2005, said that,12 years on, evacuation proves that there is no benefit from evacuation. He said, in an interview with “Israel Today”, that he supports the return of settlers to the West Bank settlements of ”Sanor and Homesh”, and claims that, today, there is security and political importance for their presence there.

In previous reports, the National Bureau has pointed out that bulldozing works continue in the evacuated settlements, and that they witnessed continued incursions by settlers under the protection of the occupation army. The Bureau added that settlers stormed those areas several times, during the past few weeks, in addition to the settlement of Homesh, near Nablus. This confirms the premeditated intention of the occupation army to re-control those areas.

Amidst the extreme and racist stances taken by the Israeli right wing government headed by Netanyahu, various Israeli media reported that the head of the Jewish house party, Naftali Bennett, was working on a “strategic law” that prevents partition of Jerusalem with any foreign body in any political settlement. The Israeli draft law stipulates that the division of the city of Jerusalem into any political settlement must have a special majority of (80) Knesset members, with this majority considered to be a line of defense which prevents the division of the city. The draft law will be presented, soon, to the Israeli ministerial committee of legislation headed by Israeli Minister of Justice Ayelet Shaked, who formed the Jewish House Party, and said that the bill will be approved by the ministerial committee for legislative affairs, and to the Israeli Knesset, and that the Israeli PM had previously signed a similar bill. He also called on the Israeli centrist parties to support the bill.

On the same subject, Israel Hayom newspaper published the results of an Israeli public opinion poll, in which 84% of Israelis opposed any political solution which allows for the existence of Old Jerusalem under the Palestinian Authority.

The Weekly Israeli Occupation and Settlers’ Violations are as follows: