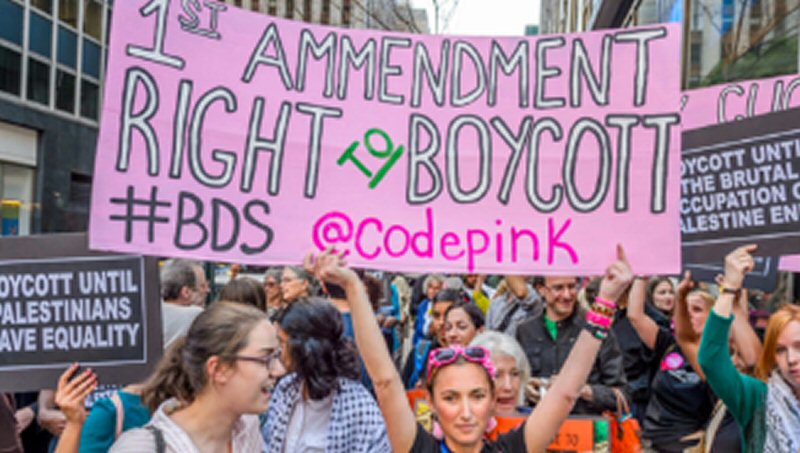 While Senators Cardin and Portman are trying to sneak a last-minute amendment into the budget bill to make BDS illegal ŌĆō violating free speech ŌĆō 26 states are also moving to make boycotts of Israel illegal. TRNN speaks to IPSŌĆÖs Phyllis Bennis about the anti-BDS efforts in the US.

Phyllis Bennis is a Fellow and the Director of the New Internationalism Project at the Institute for Policy Studies in Washington DC.┬Ā Her books include Understanding ISIS & the New Global War on Terror, and the latest updated edition of Understanding the Palestinian-Israeli Conflict: A Primer.

MARC STEINER:┬ĀWelcome to The Real News Network. IŌĆÖm Marc Steiner. ItŌĆÖs great to have you with us.

It looks as if Trump blinked and back down insisting on the border wall funding. So while the government may not see a shutdown, the bill to keep the government open may contain a sneaky end run around Congress, with an amendment by Democratic Maryland Senator Ben Cardin and Ohio Republican Senator Rob Portman that would impose criminal and civil sanctions against all organizations that participate in boycotts of Israel.

The Boycott Divestment and Sanctions movement against IsraelŌĆÖs occupation of Palestinian territories, or BDS, as itŌĆÖs popularly known, has picked up supporters and become more effective in the last few years. The reaction to it from the Israeli government and their supporters has been to seek legislation nationally and at the state level to criminalize boycotts of Israel. This has raised the hackles and opposition not just from pro-BDS activists, but civil rights and civil liberties organizations, as well as two prominent Jewish-American senators, Bernie Sanders of Vermont and Dianne Feinstein of California. The reactionary tentacles of the anti-BDS movement have pushed 26 states to pass laws making the boycott of Israel illegal, which has come to light recently because in Texas, Bahia Amawi, a Palestinian American who, after nine years of working with children as a speech pathologist, was denied her contract, because she refused to sign it. Why? Because it now includes a clause barring her from participating in any boycott of Israel.

BAHIA AMAWI:┬ĀHaving grown up as a Palestinian I know firsthand the oppression and the struggle that Palestinians face on a daily basis. You know, I have to set an example for my kids. WeŌĆÖve got to stand up for whatŌĆÖs the justice, and for rights, and equal opportunity for everybody, and humane conditions. And so for me it was an easy decision in that aspect. You know, so I could not sign it. ItŌĆÖs baffling that they can throw this down our throats, you know, and decide to protect another countryŌĆÖs economy versus protect our constitutional rights.

MARC STEINER:┬ĀTo work our way through all of this we once again welcome to the program the director of the Institute for Policy StudiesŌĆÖ New Internationalism Project, and author of the book Understanding Palestinian-Israeli conflict, and co-author of the new report Shrinking Space and the BDS Movement, Phyllis Bennis. Good to have you back with us here on The Real News.

PHYLLIS BENNIS:┬ĀGood to be with you, Marc.

MARC STEINER:┬ĀSo just immediately, what do we know about where this stands in Congress now, with the vote coming in around the budget? Is this going to get in, are they going to sneak it through? Where is it now, do you know?

PHYLLIS BENNIS:┬ĀNo one knows except the very few people that are actually negotiating between the House and the Senate, putting together a plan that would be a so-called must vote decision that has to be made by midnight Friday night. So this is little more than 48 hours from now, and we still donŌĆÖt know whether Cardin has succeeded at gettingŌĆōCardin and Portman have succeededŌĆōin getting this terrible bill in there. This will be a vote thatŌĆÖs taken without any possibility of discussion, any amendments, nothing. This will be an up or down vote, and the Republicans, of course, have the majorities in both houses. So we just donŌĆÖt know whatŌĆÖs going to happen, whether Cardin has gotten away with this or not. ItŌĆÖs all being done in secret.

Partly because, as youŌĆÖve mentioned already, Marc, there is massive opposition to this bill. The ACLU came out early and powerfully against this bill and various iterations of it, and has challenged the state bills that are underway inŌĆōnow itŌĆÖs up to 26 states around the country. So weŌĆÖre looking at a situation where itŌĆÖs a very unpopular bill, including among people who are often supporters of the U.S.-Israeli alliance in one or another form. But this one goes directly to the question of freedom of speech in the United States by making it a crime to call for boycotts of Israel. And part of the irony here is that part of the reason that weŌĆÖre seeing these attacks on the rise, escalating so quickly, is precisely because BDS is starting to work. ItŌĆÖs having a real impact globally. ItŌĆÖs providing enormous levels of education for people in this country and around the world where the campaign is underway. And itŌĆÖs having an impact on Israel. And itŌĆÖs for that reason that you see this lashing out by the Israeli government, that has now passed a law making it illegal for any international supporter to enter their country.

And as well as that, weŌĆÖre seeing here in the United States coming from Israel supporters all around the country 26 states now providing these kinds of proposed resolutionsŌĆōitŌĆÖs passed in a number of countriesŌĆōsorry, in a number of states. Passed in a number of states. And the courts are already starting to rule against it in in Kansas and other places. Courts are finding that itŌĆÖs an illegal violation of the First Amendment. I donŌĆÖt think most members of Congress want to go publicly up against the ACLU. ItŌĆÖs too important an organization, particularly for Democrats, and itŌĆÖs too popular an organization among their voters, among their base. They donŌĆÖt want to do it publicly. So the way theyŌĆÖre doing it now is this secret means of going through the process of figuring out whatŌĆÖs going to be put into the budget bill that will not be able to be discussed, will not be known until the last possible moment. No amendments allowed. And the vote will be up or down. And the question will be are you willing to allow the closing down of the government to prevent this bill? And we donŌĆÖt know if any members of Congress would be willing to do that.

MARC STEINER:┬ĀWell, there are a couple aspects here IŌĆÖd like to explore I mean, one of the fact inside the Jewish community itselfŌĆōyou know, I read in the Jewish Forward, which is a liberal Jewish newspaper out of New York; itŌĆÖs been around for over 100 yearsŌĆōhas come out against this, saying this is a mistake. The Anti-Defamation League, even though they donŌĆÖt publiclyŌĆōthey publicly do not support, support the legislation, they issued a report that was leaked out, saying this will be disaster for not just Israel but the Jewish community in America if this passed. So clearly thereŌĆÖs some dissent here.

PHYLLIS BENNIS:┬ĀWell, thereŌĆÖs massive dissent in the Jewish community. And thatŌĆÖs a wonderful thing. WeŌĆÖre seeing a shift in the Jewish community that we have not seen sinceŌĆōin my lifetime. You know, when I was a Jewish kid growing up in California there were really no options. If you identified as Jewish you identified as pro-Israel. That was what was out there. Right? It was the same for you, I think, growing up, right? We didnŌĆÖt have choices like that.

MARC STEINER:┬ĀI was a member of Habonim as a kid. So yes. Yes, right.

PHYLLIS BENNIS:┬ĀRight, exactly. I was a counselor a Jewish youth group, and Jewish summer camp, and all that stuff. But whatŌĆÖs different now for these young people growing up in the Jewish community, it turns out that being Jewish is distinct from and separate from and not at all bound up with being a supporter of Israel, and particularly a supporter of the ongoing Israeli oppression of Palestinians. So what we see is organizations on the right the left and the center in the Jewish community that we never had before. You still have AIPAC and ADL and all the others on the, on the right. But theyŌĆÖre mostly older people now. They have money, they have influence, and they have a lot of old people. Then you have in the center you have an organization like J Street, which has been very important in breaking taboos about what happens on the Hill. And on the left you have Jewish Voice for Peace in the lead; one of the most rapidly growing organizations within the Jewish community. IŌĆÖm honored to serve on the board of JVP. And we now have several hundred thousand online supporters, chapters in 40 countries. Fifteen or sixteen thousand paid members. ItŌĆÖs just growing leaps and bounds. And JVP specifically supports BDS.

MARC STEINER:┬ĀSo we also have a case, which has brought to the attention whatŌĆÖs happening on a state level, of Bahia Amawi in Austin, who is a speech pathologist; a Palestinian American born in Germany. After nine years of working with children canŌĆÖt work with them any more after September because she refused to signŌĆōnow the document to teach says you cannot participate in boycotts of Israel. I meanŌĆ”

PHYLLIS BENNIS:┬ĀItŌĆÖs an extraordinary thing. The language thatŌĆÖs going on in many of the states is actually even more harsh than the national language. ItŌĆÖs going against individual contractors like Ms. Amawi, as we just heard. And weŌĆÖre hearing it about the threats against any organizations, any business. So what the message is, essentially, is that Palestinians are attacked when they use violence to fight for their liberation, and now theyŌĆÖre being told it will also be illegal to use nonviolence. The essence of BDS and the reason itŌĆÖs such an important movement around the world is that itŌĆÖs calling for a nonviolent economic and academic and cultural pressure on Israel, nonviolent pressure, to end three specific arenas of international law violations that Israel has carried out. And it says we will boycott Israel. We will call for sanctions against Israel. We will call for divestment of corporations from Israel as long as it is continuing those violations. ThereŌĆÖs nothing violent about it. And yet itŌĆÖs being treated now as a crime.

So in the case of a Palestinian-American woman in Texas whoŌĆÖs been a very successful speech pathologist for nine years now, sheŌĆÖs being told, well, you canŌĆÖt work for the city anymore. You canŌĆÖt work with the City of Austin, Texas because our contracts are ruled by a state law that says you must sign on to an agreement that you are not now and never will in the future support a boycott of Israel. It sounds like the language of McCarthyism. Are you now or have you ever been a supporter of the Communist Party? Now itŌĆÖs are you now, have you ever been, and will you ever be in the future a supporter of nonviolent boycotts against Israeli violations of international law? ThatŌĆÖs an outrage.

MARC STEINER:┬ĀWell, you know, as we approach this new Congress coming in it remains to be seen how this develops and unfolds, with all these new young congressmen coming in who have very different points of view. I look forward to after the first year of getting back with you to really talk about that and see how this unfolds. WeŌĆÖre here talking with Phyllis Bennis. And Phyllis, I wish you to have a great holiday coming up, and a Happy New Year.

PHYLLIS BENNIS:┬ĀThank you. The same to you.

MARC STEINER:┬ĀAnd I look forward to talking to you after the new year.

PHYLLIS BENNIS:┬ĀI look forward to it.

MARC STEINER:┬ĀIŌĆÖm Marc Steiner here for The Real News Network. Thanks for joining us. Take care.