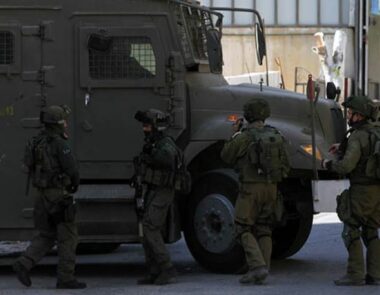 Israeli soldiers abducted, earlier Sunday, three Palestinians from the al-Jalama town, and assaulted one in al-Yamoun, in addition to storming the home of a political prisoner, in Jenin governorate, in northern West Bank.

Media sources said the soldiers abducted Mohammad Yasser Shaban, Mohammad Zakariya Hamdan, and Fadi Yahia Abu Farha while walking near a section of the annexation wall, which was built on Palestinian lands in al-Jalama.

In addition, the soldiers assaulted a young man, identified as Karam Eyad Sammar, from the al-Yamoun town, west of Jenin, while walking near the Annexation Wall on Palestinian lands in Rommana village, west of Jenin.

The wounded man suffered various cuts and bruises and was moved to the Jenin governmental hospital.

In addition, the soldiers stormed the family home of a detainee, identified as Nathmi Abu Bakr, 49, and searched the property.

It is worth mentioning that, on October 21st, 2020, the army poured sponge finished concrete into Abu Bakr’s home, sealing approximately %40 of the property; the soldiers repeatedly invade the property to inspect it.

The army claims Nathmi is responsible for the death of an Israeli soldier, identified as Staff Sgt. Amit Ben Ygal, 21, after he reportedly dropped a large stone on his head from a rooftop when the soldiers invaded Ya’bad town, on May 12, 2020.

In related news, the soldiers shot a young Palestinian man at the entrance of the al-Fawwar refugee camp, south of Hebron, in the southern part of the occupied West Bank.