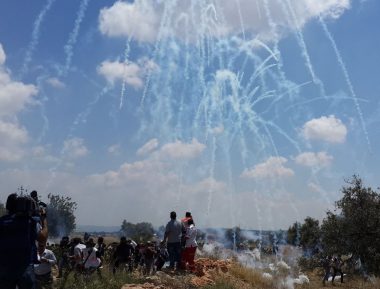 The Popular Committee in Ni’lin said the soldiers used excessive force against the protestors, as they marched towards the Annexation Wall, separating the villagers from their lands and orchards.

The committee added that the soldiers fired concussion grenades and gas bombs at the protesters, and prevented them from advancing.

The soldiers also detained a peace activist, and released him later after taking his information, in addition to chasing Mohammad ‘Ameera, the coordinator of the Popular Committee, in the olive orchards.

Also on Friday, the soldiers attacked the weekly nonviolent protest in Bil’in nearby village, and kidnapped three Palestinians and three international peace activists.

The soldiers also attacked the weekly protest in Kufur Qaddoum town, east of the northern West Bank city of Qalqilia.