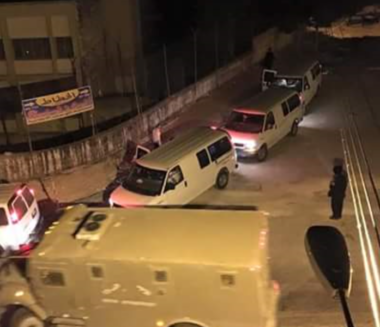 Israeli soldiers injured, on Monday at dawn, five young Palestinian men, including a journalist, during protests that erupted after the army accompanied dozens of illegal colonialist settlers into Joseph’s Tomb, in the northern West Bank city of Nablus.

Media sources said Palestinians protested the invasion into the site, and its surrounding areas, and hurled stones at the army jeeps.

They added that the soldiers shot at least five Palestinians with rubber-coated steel bullets and caused many to suffer the effects of teargas inhalation.

One of the wounded Palestinians is a journalist, identified as Mo’tasem Saqf el-Heit, who was shot with a rubber-coated steel bullet in the abdomen.

The incidents took place after many army jeeps accompanied 17 Israeli buses, and many cars, carrying around 1100 illegal colonialist settlers, and headed towards Joseph’s Tombs, while the soldiers closed its surrounding areas, preventing the Palestinians from entering them.

Among the Israelis who participated in the invasion are Eli Cohen, a member of Knesset and the Minister of Economy and Industry, in addition to, Yossi Dagan, the head of the so-called “Regional Council of Settlements,” in northern West Bank.

Joseph’s Tomb is revered by Jews, Muslims, Christians, and Samaritans alike. The Israeli military allows Jews to visit as part of organized pilgrimages, despite the site being in Area A where the PA has full control and prohibits Muslims from worshiping at the site.

Palestinians believe that Joseph’s Tomb is the funerary monument to Sheikh Yousif Dweikat, a local religious and social figure.

Also at dawn, the soldiers abducted sixteen Palestinians from their homes in several parts of the occupied West Bank.