Soldiers Seriously Injure A Palestinian Worker, Abduct One, Near Jenin 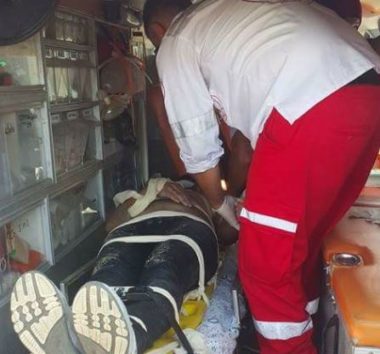 Israeli soldiers shot and seriously injured, on Friday evening, a young Palestinian man, abducted another and caused several others to suffer the effects of teargas inhalation, after the army chased Palestinian workers near Jenin, in northern West Bank.

Media sources said the soldiers chased the Palestinian workers near the illegal Annexation Wall, which was built of lands belonging to residents of Rommana village, west of Jenin.

They added that the soldiers fired many live rounds at the workers, seriously wounding one, and abducted another, identified as Mohammad Samir Refa’ey.

The soldiers also fired a barrage of gas bombs, causing many workers to suffer the effects of teargas inhalation.

The incident is part of a series of Israeli violations and attacks targeting Palestinian workers, and farmers, on lands near the illegal Annexation Wall in Jenin, and several other parts of the occupied West Bank.