Two Meals and Two Fields: At The Intersection of Hunger and Labor 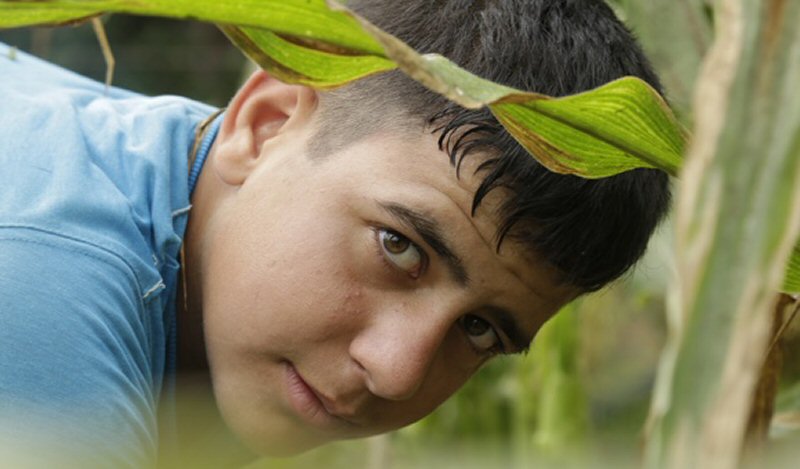 Ramallah, September 20, 2017 — “My favorite dish is fish,” said Muath Ghalia. At 12 years old, he is well versed in the challenges of producing and eating food in the Gaza Strip. “The last time I ate it was four or five months ago, I don’t remember clearly,” he added.

Muath and his family of eight depend on the two acres of agricultural land his father rents in Beit Lahia, northern Gaza, for their vegetable intake.

Muath and his brother eat only two meals a day, lunch and dinner, while putting in long hours between school and the farm. “We do not have breakfast,” he explained to Defense for Children International – Palestine, “because we wake up early and go directly to work.”

Lunch typically consists of potatoes or tomatoes, fried, to add in extra calories. Although hungry, Muath said he is at times too exhausted to eat. “Sometimes I skip dinner and go to bed once I come home from work because I am very tired.”

Most of the family’s meals are vegetarian by default. The family rarely eats chicken, red meat, or fish. 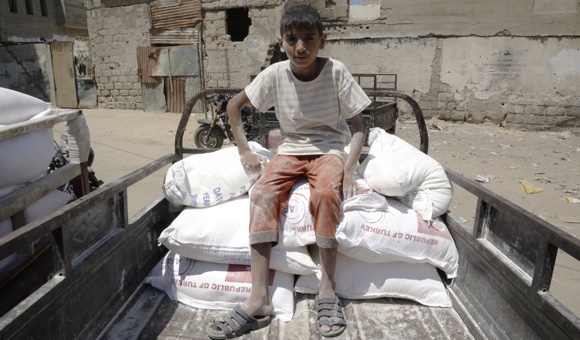 The assistance goes a long way in staving off malnutrition. Even so, the diet it allows is fairly limited, putting the family’s eating schedule on repeat mode. “The last meal I had was lentils. We had lentils yesterday as well,” Muath told DCIP. 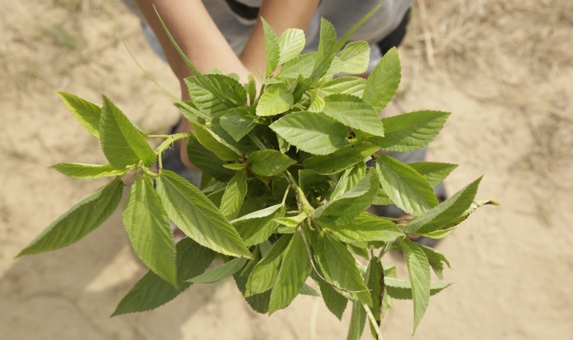 Muath holds a small bundle of jute leaves that he helped to cultivate as part of his regular work on his family’s leased agricultural fields. (Photo: DCIP / Saud Abu Ramadan)

The land Muath works on also acts as the family’s main source of income, provided that the family is able to sell what they grow in the local market.

Their main crops are jute leaves, used for the Palestinian dish of “molokhia,” corn, and eggplant.

With high poverty rates depressing the local market and the blockade preventing the family from exporting crops to the West Bank, the harvest is sold for pennies. Jute will go for six cents a pound. 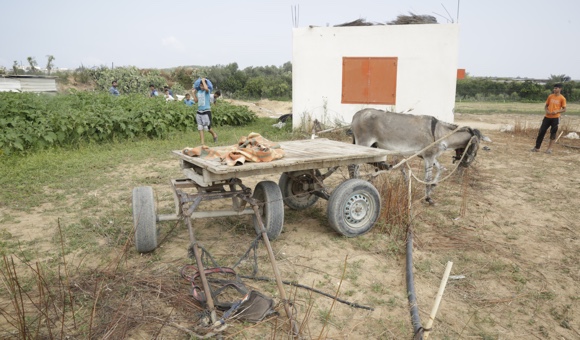 Muath and other youths load crops onto a cart in preparation for selling them at the market. (Photo: DCIP / Saud Abu Ramadan)

The intersecting experiences of childhood hunger and labor within a gaunt food economy is common to many in Gaza. 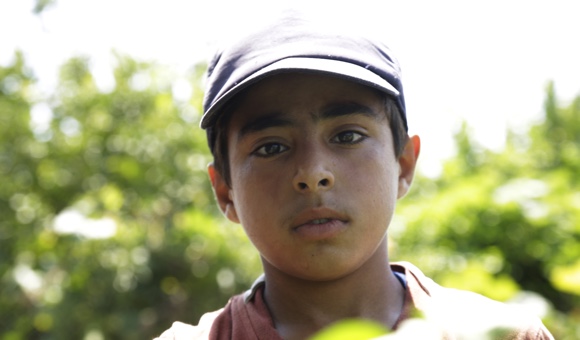 Only a year older than Muath, Ahmad Abu Samra, 13, also gets just two meals a day. “Because we don’t have enough food,” the boy said, “we have adjusted ourselves to having two meals per day.”

His family of seven depends on their house’s 145-square-yard garden in Beit Lahia for the majority of their food intake.

“My kids don’t eat well, and I am not able to provide them with sufficient food and water,” said Ahmad’s father, Adeeb Abu Samra, to DCIP. 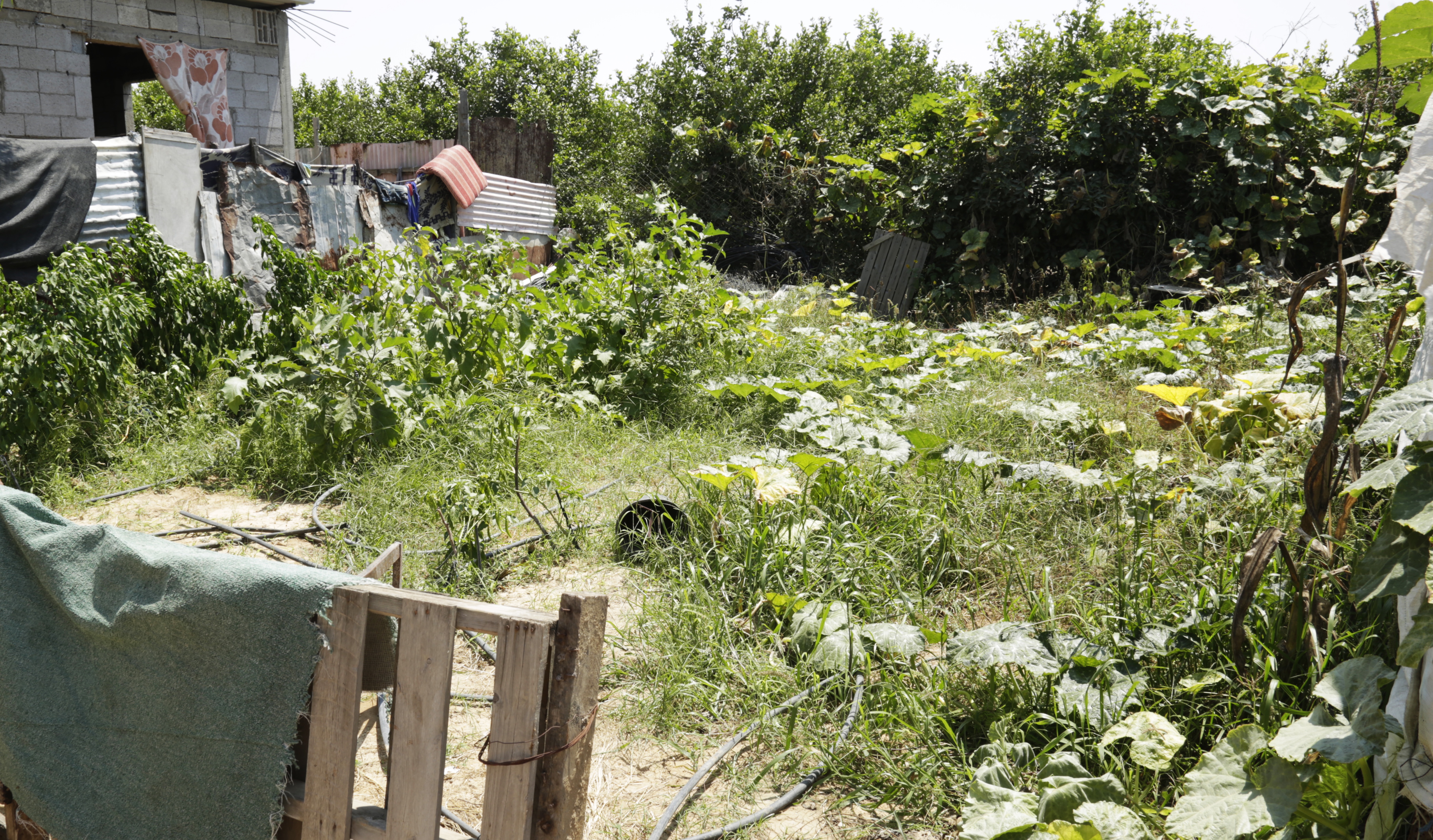 Ahmad works on the farm, along with his elder brother and mother, to save the wages of one or two workers. When he’s not busy there, he takes on paid labor at other farms.

“If I don’t work, we wouldn’t find food in our house. We already don’t have much but it’s better than nothing,” commented Ahmad.

Israel’s 10-year blockade on Gaza has highly impacted food availability and production. The blockade has limited the entry of both food and agricultural materials, keeping farms and kitchens operating close to the bone.

According to the Institute for Middle East Understanding’s report, pasta, yeast, flour, cooking oil, canned tuna, beans, black pepper, sugar, and rice are among the food items that the blockade has limited or prohibited from entering Gaza at some point in the last decade. 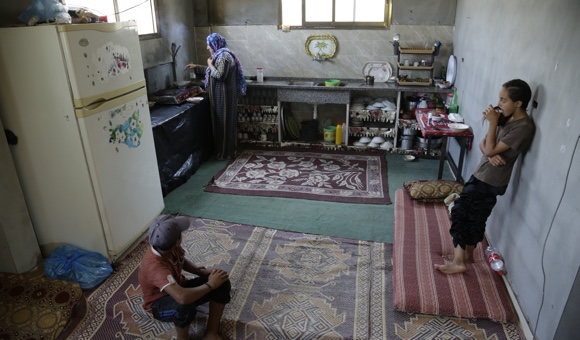 Land and sea access restrictions enacted by Israel have only worsened the shortage by cutting Gazans off from their own food sources.

Ghalia estimated that his agricultural profit losses from the last three Israeli offensives on Gaza total over $30,000. 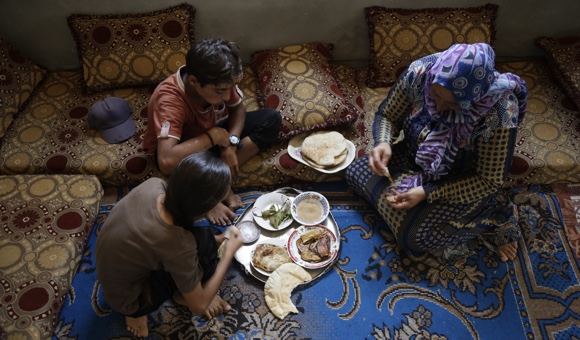 Ahmad Abu Samra, 13, sits on the floor for a meal of bread, eggplant and peppers with his mother and sister. (Photo: DCIP / Saud Abu Ramadan)

Together, these factors have produced widespread food scarcity and international aid dependence. Today, nearly half of the Strip’s 2 million inhabitants are moderately to severely food insecure.

In July 2017, the WFP and its partners provided food assistance to 246,000 qualifying Gazans.

However, food assistance, like all other types of donation-driven aid, is not always guaranteed. Just last June, the UN headquarters announced that food assistance to Gazans could be scaled back because of insufficient funds.

Access to adequate food is a basic right, according to Article 24 of the Convention on the Rights of the Child but Israel’s decade-long siege is blocking multiple pathways to solving Gaza’s food shortage. For now, with no easing of restrictions on the horizon, Ahmad and Muath will continue to bend their backs into the fields, in hopes of a good yield.