Watchtower As A Neighbor in Arroub Refugee Camp 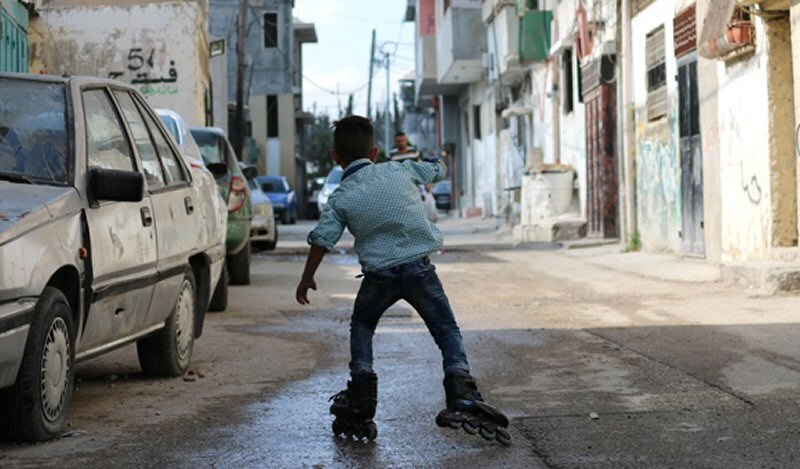 Bethlehem, October 2, 2017—Hadeel Janazra, 13, lives right next to the site where a Palestinian teen was shot dead last spring. Israeli forces shot the teen directly in the heart, killing him on the spot.

She is from Arroub refugee camp, where the concept of safe space is a non sequitur. An Israeli military watchtower stands opposite the camp’s main entrance.

With her home’s location on the main road and a direct line of vision to the military tower, violent eruptions are routine for Hadeel.

There is a yard outside her house, a rarity in the densely populated southern West Bank camp between Bethlehem and Hebron. In it, she plays badminton with her cousins, rides her bicycle, and regularly witness confrontations with the Israeli military.

“I feel threatened when I see soldiers near the house because they could come in and harass us, or fire teargas and sound bombs at the house,” Hadeel said.

Indoors, she is not much better off. “Sometimes the army stops at the entrance to our house. They have entered the home several times to search for youths,” Hadeel told DCIP, recounting when soldiers turned her roof into a temporary military post for several hours.

She continues down her list, a somber inventory of alarming events and encounters. “I once saw a child getting arrested at the entrance to the camp,” Hadeel said, gesturing a short distance away, to one of Arroub’s main entrances. “Soldiers caught him in the morning when we were going to school. He was carrying his schoolbag but they beat him and accused him of throwing stones.” 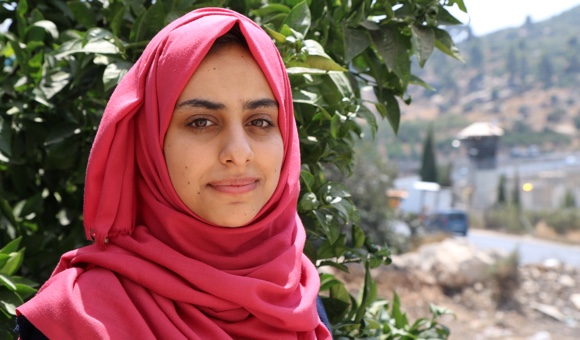 Her account is the prevailing narrative among children in Arroub. Witnessing or experiencing detention, injury, harassment, and sometimes death are part and parcel of growing up in the camp.

Arroub sees one of the highest frequencies of raids compared to the other West Bank refugee camps. Pervasive Israeli military presence in the camp flies in the face of children’s right to play.

A large forested park area borders Arroub’s cemetery which spans down a hill above the camp’s southern entrance. But frequent Israeli military activities on the hill often lead to clashes. When DCIP visited the area, the recreational space was dejectedly vacant.

Fifteen-year-old Omar Madi was fatally shot by Israeli forces in the cemetery in 2016 when a small group of youth were throwing stones, according to witness testimony collected by DCIP at the time.

Below the park and the cemetery, the only thing between Arroub and the daunting military tower is Route 60. This road is a major thoroughfare that connects to the Gush Etzion settlement bloc, one of the largest clusters of Israeli settlements in the West Bank. Route 60 is heavily trafficked by military vehicles and Israeli settlers.

Continued expansion of the settlement bloc has only increased tensions.

“All of the entrances to the camp are near the main street [Route 60],” said Omar Mahdid, 16, who also lives in the camp. Because of this, he explained, contact with Israeli settlers is inevitable.

Just days before DCIP spoke with Omar, he said he narrowly missed being injured by an Israeli settler on Route 60, when he was leaving a playground. “Three days ago we were walking down the street when a settler’s car passed by and the settler opened the car door, to hit us.”

Interaction with the military is likewise unavoidable for children exiting or entering the camp. “Soldiers stop and search you for no reason and they can accuse you of anything,” Omar said.

Even at home, after Arroub falls quiet, there is no guarantee that children won’t encounter the Israeli army. “Soldiers entered my home through a window at 2 a.m.,” Omar told DCIP. He was 14 at the time that he and his brother were detained from their beds and taken. He was interrogated and detained for eight days for allegations he said were false.

Omar is scared of getting arrested again.

He is right to worry. DCIP research found that Palestinian children living in close proximity to Israeli settlements are at a higher risk of military arrest.

Arroub matches this pattern. At least 12 children were detained from the camp during the first half of 2017, according to the Palestinian Prisoner’s Society.

Play is a human right for children under the United Nations Convention on the Rights of the Child (CRC), essential to healthy brain and body development. But how can children in Arroub play when all the spaces available to them, public or private, put them at risk of becoming witness or victim to damaging events?

Despite Israel being a signatory to the CRC, Arroub is case in point that Israel has failed to protect the rights of Palestinian children that it is obliged to ensure as an occupying power.

The camp was created in 1949 for those forced from their homes during events Palestinians refer to as the “catastrophe,” or the Nakba. Both Hadeel’s and Omar’s grandparents were expelled from Iraq al-Manshiya, a Palestinian village around 21 miles west of Arroub as the crow flies. The Israeli town of Kiryat Gat now stands in its place.

Refugee camps were intended to be a temporary solution to an emergency. But for Hadeel, the state of conflict endures under Israeli military occupation, splintering any semblance of a safe childhood.

“I always see the army at the entrance to the camp and at the watchtower,” Hadeel said. “I see them permanently.”

Also in Human Interest: 09/18/17 Banksy Art to be Sold at The Walled Off Hotel