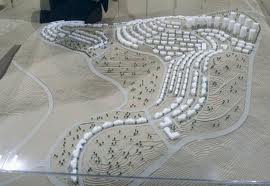 Around 20 suppliers agreed to assist building the first modern Palestinian city in the West Bank, however with no use of material produced in Israeli settlements, the Associated Press announced on Tuesday. Bashar Masri, the project’s developer, said the Israeli suppliers promised not to make use of products or services from illegal settlements towards the building plan. Masri explained that he usually tries to use Palestinian suppliers whenever possible. However, when necessary, he resorts to Israeli companies provided that products and services from any Israel-occupied territories (the West Bank, East Jerusalem and the Golan Heights) are not used.

Israeli residents of the West Bank criticized the decision accusing the suppliers of giving in to an international boycott of settlement goods and services.

The city of Rawabi, situated at 30 kilometers north of Jerusalem, forms a main part of Palestinian Prime Minister Fayyad’s intentions to set the foundations for a future Palestinian state, beyond any eventual progress in the peace negotiations.

The Rawabi project’s developer told the Associated Press: ‘Settlements are diabolical. They steal Palestinian land and are an obstacle to an independent Palestinian state, and it’s time for us to put an end to that harm,’

Masri declined to provide the identity of any of the Israeli companies, saying only they are suppliers of building and construction materials.

Palestinian activists and supporters have launched a boycott and divestment campaign targeting Israeli holdings and Israeli companies over the Occupation.

Fayyad publicly advocated a boycott of settlement goods in the West Bank, and earlier this year, a law was approved sentencing heavy penalties and prison term for Palestinians who work in settlements.

Nevertheless, no alternative sources of employment have been secured for the estimated 21,000 Palestinians working in settlements in the sectors of construction, agriculture or industry, nor the law isn’t being enforced.