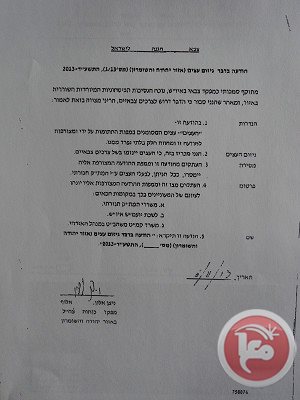 According to local sources, the military placed notices in Hebrew and Arabic on trees throughout the main olive grove in town, saying that they will be uprooted by military order.

Over a million olive trees have been uprooted by the Israeli occupation forces since 2000, and the destruction continues to take place on a regular basis. The destruction of olive trees, both by Israeli soldiers and the Israeli military, is concentrated during the olive harvest season of October and November each year, when hundreds of thousands of Palestinian farmers head to their groves to harvest their olives for that year.

The mayor of the village of Yabad told the Ma’an News Agency that a few days before these military orders were issued, the soldiers had come into town and told the villagers that if kids in the town kept throwing stones at the soldiers when they invade the town, the army would come back and cut down all the olive trees in town.