Stealing the Land, Inch by Inch 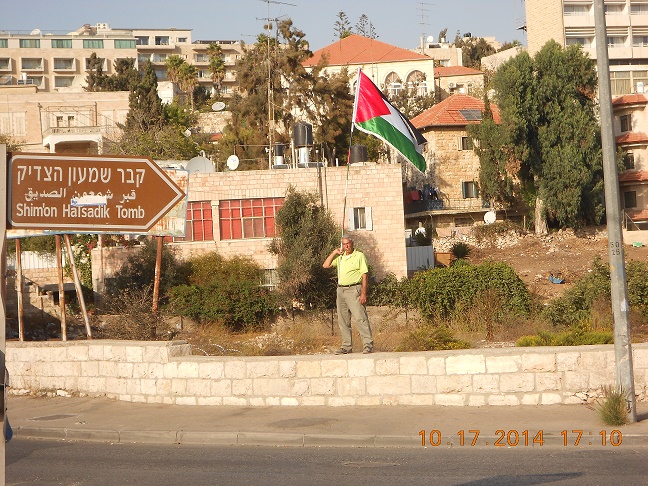 … this is the way the world ends; not with a bang but a whimper. From “The Hollow Men” by T.S. Eliot

The words of the poet T.S. Eliot sprang to mind at Sheikh Jarrah in East Jerusalem and again at Ush Ghraub in Bethlehem as I listened to the stories of Palestinian land theft.

Once adamant defenders of their lands, many have become disheartened and resigned to watch generations-old precious family lands stealthily taken from them by foreigners.

Squeezed from all sides, Palestinians watch on defensively as declared military sites or arbitrarily designated archeological grounds are deemed “off limits” to Palestinians.

Walls and barriers divide family farmlands placing portions of it in Israel. Permits are required to visit the land and tend the precious olive and fruit trees; restrictions change on whim, and permits, frequently denied, make access impossible. Ultimately Israel declares the property abandoned and it becomes state property.

The family, dependent on olives for its livelihood, is deprived of making a living. Many are forced to move out. Is this not a form of ethnic cleansing?

Elias, a gentle university student, tells this story of the orchards on his family’s land.

When the wall was erected between Israel and Palestinian territory, over a hundred of their olive trees ended up on the Israel side. Permission from Israel was needed to go there; and as years went on, restrictions increased.

Only the immediate family was allowed to go – no vehicles, only a donkey – to carry the 25 kg. bags of collected olives back in the allotted time designated. With each successive harvest, regulations became harsher; and most recently, Elias says, no permits were granted and the trees, in his family for generations, were left to the mercy of Israel.

By Israeli law, if land is not used for seven years, it becomes state property. Requests for permits to enter their land have been denied in recent years.

He does not know how the trees are fairing. Perhaps the new owners are using them. He can only hope they are receiving the love and care his family provided for generations.

I was to hear similar stories, different versions but all add up to one goal; the desire of Israel to take over Palestinian lands by stealth and claims of abandonment or by intimidation and harassment, witnessed by this story.

In 2014, I returned to the park at Ush Ghraub that I had watched being built with the help of internationals in 2008.

It was a bright Sunday afternoon, yet the park was empty except for a small group of birthday celebrants. Greeted by Samer, the new director, we sat inside to talk.

“People are afraid to come,” he said, “because soldiers come and check their ID cards. It scares the children; and with a bad economy, many cannot afford the 3-shekel entrance fee”.

The park is in area C, under complete control of Israel. On a hill overlooking the park, designated Peace Park, is a military post with an observation tower, a constant reminder.

A few years ago, demonstrations against the military presence and the encroaching Jewish settlement on the Bethlehem suburb were weekly events that drew residents and international supporters to protest.

Today, few bother and there is a feeling of benign resignation. Samer finds it difficult to talk; in his eyes there is sadness and his voice falters as he speaks. “I do not know what will happen; we just wait”.

He leaves, seemingly disturbed by his own reflections as he relates the situation. A waiter brings water and coffee. We offer to pay; Samer refuses, we insist telling him to use the money to pay for those who cannot. We leave. I hear the planes, always the planes, circling, diving, warning.

I recalled earlier visits to Sheikh Jarrah, meeting the evicted seated on chairs in the street across from their house; and others camped in tents along the curb near their homes now occupied by new Jewish settlers.

What must they think? And what is in the minds of settlers who brazenly take over their homes? Biblical arguments do not justify human concern for the victims. Nor does Israel’s system of justice.

East Jerusalem evictions of Arabs are justified by court order; settlers come, take houses and defend the action using the Bible, which they claim says this land belongs to the Jewish people.

In 2014, a group of demonstrators assembles on the street across from the Sheikh Jarrah district. It is comprised of residents, Jewish supporters from West Jerusalem, Internationals from Sweden and Ireland, the UK and EAPPI.

Johannes came from South Africa to support Palestinians. He says he sees the same conditions here as were imposed in South Africa.

“We faced evictions, house demolitions; had to carry ID cards and get permits to move”.

A man holding high a Palestinian flag says, “Israel is the problem; it’s not religion”.

Although the vote passed 274-12, Liel, who lives in West Jerusalem near Tel Aviv, says the majority there are right wing; and that support by Jews overall is only about 5%.

Nevertheless, the pressure on Israel has become international and that will make a difference.

Nasser, a Palestinian lived in Sheikh Jarrah until his house was taken five years ago.

He says Israel government has a plan to bring immigrants. Israel only understands their power. He went to the U.S. in 2010 to explain, but feels the US serves only its interests in the Middle East, oil and gold.

“What I don’t understand is why the US supports this apartheid state,” he says. After 20 years of negotiations with Israel, the result is more settlements, more restrictions and ethnic cleansing. He sees continued encroachment onto Arab lands and asks, “How should Palestinians react?”

Two lovely ladies had been talking to him. From Ramallah, they had been given a one day permit to see a doctor and came upon the demonstration they had not known about.

“It’s so sad,” one said, almost crying, “It’s so difficult to be a Palestinian anywhere”.

Israeli settlements continue while negotiations are “on hold”. In Silwan, where the ladies are from; in Beit Sahour, Beit Hanina, A-Sawaneh and villages and towns all over the West Bank the squeeze is felt.

The world can no longer ignore the cost of human suffering.