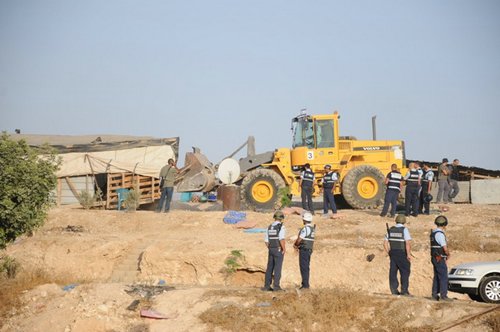 Several Israeli military and police vehicles, accompanied by bulldozers, invaded on Monday morning the Bedouin village of al-‘Araqib, in the Negev, and demolished it for the 78th time.Salim al-‘Araqib, a local resident of the village, said several Israeli military and police vehicles invaded the village approximately at 5 at dawn, and demolished three homes.

He added that the soldiers also demolished several residential structures, barns and sheds, and attempted to demolish a structure used by the residents as a mosque.

The soldiers also tried to smash some cars using their bulldozers, but the villagers managed to remove their cars away.

“The attack and destruction of property came without a warning,” al-‘Araqib said, “Women and children are now displaced in the cold, without any shelter.”

The village’s Sheikh, Siyah Abu Mdeighem, said this is the 78th destruction carried out by the Israeli authority against the village, leaving the families without a shelter, and that the army also continuously demolishes sheds and barns owned by the families.

“Israel is betting on us surrendering and leaving,” he said, “But we never surrender; our patience is deeply rooted in our land, they can demolish the village as much as they want, we will never leave.”

“The Israeli government is run by criminal gangs, but we are here to stay,” the Sheikh said, “Israel might even resort to killing us, but we are willing to sacrifice our lives for our land.”

The destruction of the village comes part of what Israel dubs as “The Negev Development Plan,’ which aims to build settlements and malls after removing and relocating the Bedouins from their villages, unrecognized by Tel Aviv although they have been there before Israel was established in the historic land of Palestine in 1948.