No Real Sign of Reconciliation between Fateh and Hamas 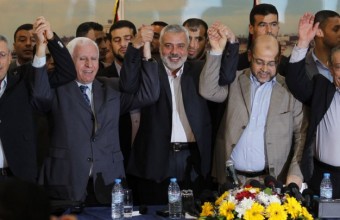 The two main Palestinian political forces show no sign of moving the necessary steps to get to the solution of a fracture that has, for years, damaged the Palestinian cause. Meanwhile, the Hamas list was surprisingly victorious in student elections at BirZeit University, the historic stronghold of Fateh.In mid-April the secretary of Fateh in the West Bank, Marwan Barghouti, urged from the Israeli prison where he is being held since 2002, Palestinian political leaders to put aside divisions and only take up the interests of their people. According to the Palestinian News Network, the appeal was widely shared by the people of the occupied territories but echoed in the empty power halls of Ramallah and Gaza.

The latest developments, which occurred on the anniversary of the agreement of the ‘Palestinian national reconciliation’, merely confirm what the analyst Abdalhadi Alijla has been repeating for a long time: that the rift between Fateh and Hamas, between President Mahmoud Abbas and the leaders of the Islamic movement, is no longer the result of an ideological conflict and is now only a power struggle.

The election of the student council of BirZeit University, in addition to the recent ‘visit’ of the PNA in Gaza, reveal that the two sides do not hesitate to make use of their influence and power to intimidate each other. Abu Mazen has suspended all elections scheduled in the universities, following the victory at BirZeit.

For the first time since 2007, breaking the traditional hegemony of Fateh, amd in a university whcih is just a few kilometers from Ramallah, the student party representing Hamas won. Representatives of the Islamic group have obtained 26 seats, 19 the seats of Fateh, the Popular Front for the Liberation of the Palestine 5, and one seat which went to the three minority parties of the left. Fateh had won an earlier election in Al-Quds University, in Jerusalem and in Bethlehem, but the defeat in BirZeit, its historical stronghold, caught them by surprise. Dunia al Watan, the political voice of Fateh, reported recently of a fierce exchange of accusations between the leaders of the party regarding the responsibility of the failure. In any case, Abbas, rather than wondering about the reasons for the popularity of Hamas in the West Bank (perhaps growing even more than in Gaza), preferred to suspend the voting in the remaining universities. In the meantime, the PNA police does not cease with the arrest of alleged militants of the Islamic movement, in line with security cooperation with Israel, of which, moreover, the PLO Central Council has called, in recent months, the immediate termination.

To expect a different behavior from Hamas, however, is likely an illusion. Of student elections in the universities of Gaza we do not hear, and Fateh rivals are subject to intimidation and arrests. In addition, two days ago, a Gaza court suspended the election results of the union of lawyers (one of very few voting held since 2007), won largely on April 6 from the Fateh list. No less disturbing is the fact that the delegation government, with some ministers, who in recent days had reached Gaza, was kept isolated in a hotel guarded by heavy security forces, without a chance to meet freely with residents and representatives of other political forces. Jamil Mizher, a member of the Political Bureau of the PFLP, said that on April 20, security agents prevented him from meeting Hamas ministers and that they let him go only after protesting for hours. Ministers went back to Ramallah after just a day of work, at the insistence of Prime Minister Rami Hamdallah..

At the base of the conflict, there is always the issue of some 40,000 employees of the dissolved executive body of Hamas, in Gaza, which the current government has no intention of absorbing into the PNA, regardless of the consequences for many Palestinian families. Khaled al-Batsh, a member of the political bureau of the Islamic Jihad, has admitted the failure of the organization to bring closer the positions of Fateh and Hamas.

The reconciliation agreement would appear to be little more than a piece of paper.