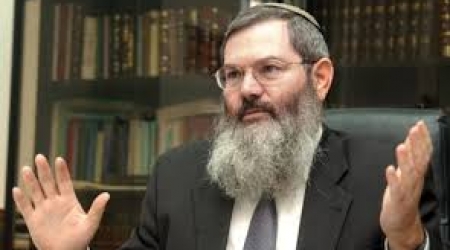 Israel’s new coalition government, under the direction of PM Benjamin Netanyahu, has taken on Rabbi Eli Ben-Dahan as its deputy defense minister, known for his previous assertion that Palestinian are ‘human animals’.Al Ray Palestinian Media Agency reports that a wave of denunciations have aroused after appointing him from Israeli left-wing parties, in light of his extremist positions towards Palestinians.

Meretz leader Mussi Raz warned of Ben-Dahan’s previous statements, in which he was quoted to say: ‘The Palestinians do not deserve life,’ describing them as ‘human animals’, and they are not human beings and their life and their death are the same.

Raz added on his Facebook page: ‘ Appointing Eli Ben-Dahan from the Jewish House as a deputy defense, what means that he is responsible of the Civil Administration, the government arm in the areas, is a crime. We are talking about a person who once said that the Palestinians are a human animals- sub-humans, they are not human beings and do not deserve life.’

He continued: ‘Imagine a European deputy minister who is responsible for the Jewish minority there, says that the Jews do not deserve life,’ concluding: ‘If anybody still has an atom of ethics should prevent the formation of this government of hatred and death.’