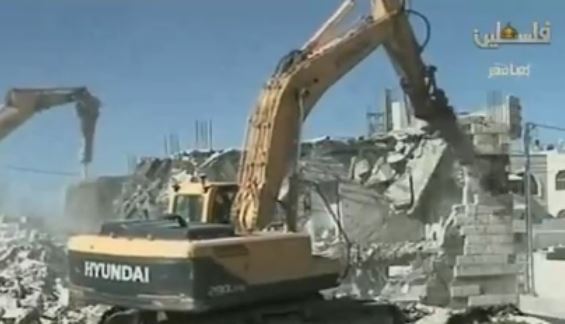 Israeli soldiers invaded, Tuesday, Silwan town, south of the al-Aqsa Mosque in occupied East Jerusalem, demolished three homes, near the al-Magharba Gate, and the Salah Ed-Deen Street, and kidnapped two Palestinians.Resident Nidal Abu Khaled, owner of two of the demolished homes, said the soldiers stormed his property, approximately at 4:30 at dawn, and attacked the family with pepper-spray before forcing them out.

One of the homes was 180 square/meters while the other is 80 square/meters; they were built last year, and the family filed numerous appeals in Israeli court, but a ruling against the two building was finalized earlier in May.

He added that the army invaded the area two weeks ago, but could not demolish the building due to the existence of many stairs leading to the building, but today, the soldiers came equipped with special machinery that enabled the destruction of his property.

In addition, soldiers demolished an apartment on the top third floor of a residential building in Salah Ed-Deen Street, belonging to resident Rafiq Salayma.

Salayma said he has been living in the building, along with his eight other family members, for the last six years.

The soldiers demolished it because its sealing collapsed during the snowstorm, this past winter, and the family managed to fix it, but the City Council ordered its destruction.