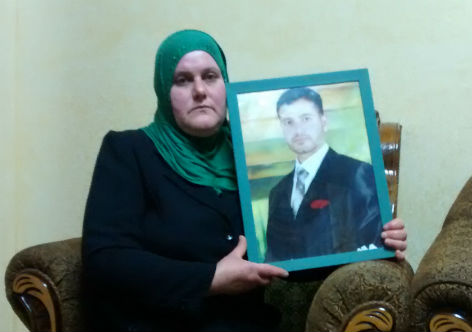 Islam Hamed was arrested for the first time at the age of 17 by the Israeli authorities. He was sentenced to five years in prison. Nine months after the end of that sentence, he was imprisoned again under a process called administrative detention, despite not facing any concrete charges.
Israel claims he is a risk to security, but has provided no details on that claim.

His second term in custody lasted two years.
In 2010, Hamed became once again involved with opposition groups in Palestine, and months later was detained for the third time, this time by the Palestinian Authority, acting on behalf of the Israeli military authority that governs all life in the West Bank.

Islam Hamed is Palestinian, but his mother Nádia Hamed is from São Paulo, which earns him Brazilian citizenship as well. And he is on a hunger strike.

On the 12th day without food and the third day with no water, Hamed has lost 24 pounds, can no longer stand up, and has been given intravenous doses of serum. Despite his serious health condition, he has been firm in his decision to continue striking, and to refuse water as well as food.

In 2013, Hamed’s relatives in Brazil asked the Brazilian Embassy for Middle Eastern Affairs for an intervention in the case. The request was also submitted to its Brazilian branch in Palestine.

Brazil’s ambassador to Palestine Paulo França argues that the situation is a delicate one and says that negotiations with the Palestinian government are underway.

His family, however, questioned the delay, saying they are afraid that Hamed may die from his hunger strike.

They also challenged the statement by the Palestinian Authority’s ambassador to Brazil, who said that if Hamed is being tortured, it is because he has misbehaved. They point out that international law forbids torture for any reason, and forcefeeding is considered a form of torture.

Brazilian officials claim they have made successive attempts to obtain Hamed’s release, with both the Palestinian and the Israeli governments, but have been unable to secure a deal for his release.
KBOO Radio spoke with Fabio Basco. a Brazilian organizer supporting Hamed.

Click on the link below for the audio interview.

Soldiers Abduct A Palestinian And His Son In Hebron