Palestine and Israel: The Double-Standard 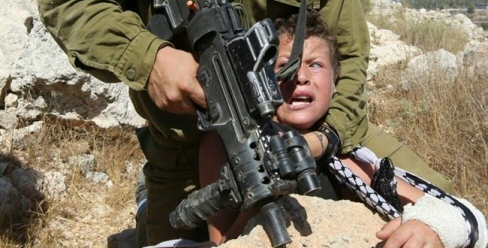 In the world of marketing, it is a given that what ‘delights’ the customer today, will simply be an expectation tomorrow. For example, when cameras were first introduced on cell phones, this was an exciting concept and people flocked to the stores to upgrade their devices for a fancy new one with a camera.Today, however, one would be hard-pressed to find a cell phone that didn’t have a camera; it would be the rare customer who would be interested in such a product. What was exciting once, is now merely ‘ho-hum’.

The same concept is true of the horrors experienced in the world. Mass shootings in the United States were once headline news for days, but now, as society has become accustomed to such tragedies, they are reported once, with perhaps a bit of follow-up, but are quickly cast aside as the public looks for the really important news like what the Kardashians are doing today, or how their favorite sports team did in the most recent game.

How often do we hear or read about more Palestinian homes being bulldozed? Business as usual, of course, so we don’t consider the suffering of the victims; it is all too commonplace.

This week, remarkably, a video went viral of a heavily-armed IDF (Israeli Defense Force) terrorist/soldier attempting to arrest an 11-year-old boy, with one arm in a cast, who was accused of that most heinous of all crimes, throwing stones. Arrests of children by IDF terrorists are commonplace; what made this one different was the successful resistance by the child’s family and friends, all women. The video shows clearly the brutality of the terrorist, holding the child in a headlock, slamming his head on the ground. It also shows his 15-year-old sister grabbing the terrorist’s arm and biting his hand, and his vicious response to her. The boy’s mother is seen trying desperately to free her child, as other women also slap him, pull at his mask, and generally work to release the boy. Ultimately, they are successful, as the terrorist, calling for assistance from another terrorist nearby, finally releases the child and walks away. In an apparent temper tantrum he throws a stun grenade at the small crowd of Palestinian heroes as he departs.

Israel, predictably, is attempting to spin this episode to attempt to make the IDF terrorist appear to be the victim.

He didn’t know, Israel spokespeople say, that he was attempting to arrest a child. That is quite puzzling when you look at the boy, Mohammed Tamimi. He is small of stature and baby-faced, and still, quite obviously, a child.

The boy was throwing stones at soldiers, they proclaim. Well, let’s see: stones vs. guns. One wonders who is really committing a crime. We will give Israel the benefit of the doubt and assume that the boy is right-handed, since his left arm is broken and in a cast past his elbow. However, one wonders how much of a threat a stone-throwing child with a broken arm can be to a heavily armed terrorist soldier.

The women were brutally assaulting the soldier, Israel says. We will acknowledge that the soldier was definitely outnumbered. But again,one must wonder how threatened a heavily-armed soldier could feel against several women and a young girl attempting to free a child from his cruel grasp. And is anyone not aware of the concept of the protective maternal instinct? The child was in grave danger, and his mother, and the women with her, were willing to risk their lives to rescue him.
Israel’s Culture Minister Miri Regev, who opposes any rights for Palestinians, and who, in 2012, said she was “happy to be a fascist”, said that the soldier should have shot the women who were attempting to rescue the child. That he didn’t is nothing short of miraculous.

The boy’s parents have since been arrested; whether or not they have been charged with anything is unknown at this time, but since Israelis can arrest Palestinians without charge, and detain them for years without charge or access to legal assistance or family members, this isn’t surprising.

Let us consider for a moment the international reaction if the roles in this episode had been reversed. Imagine, if you will, that a heavily-armed Palestinian soldier (if Palestine had an army), had arrested a young Israeli boy with a broken arm. The imaginary Palestinian soldier has the child in a violent headlock. The child’s mother, sister, and some other women rush to the boy’s rescue, slapping the soldier, biting his hand and eventually freeing the child. Would not United States government officials praise the women while they condemned the brutality of the soldier? Would not the story be front-page news around the world, describing how these courageous Israeli women had successfully fought off an invading soldier, and rescued an innocent child? Would not there be endless news analyses about the evils of the occupation, Palestine’s illegal settlements, unwillingness to negotiate, flouting of international law, etc., etc.?

Why then, has the U.S. not praised the Palestinian women as heroes? Why not condemn the Israeli terrorist? The video has gone viral, and there have even been some news stories about it, but this is due more to social media than to any actual journalistic integrity on the part of corporate-owned entertainment programs masquerading as news shows. And there is hardly a word about the fact that the soldier was, in fact, on illegally-occupied Palestinian territory.

Yet the overall narrative of Israeli oppression of Palestine is changing; the very fact that this event made the news is clear evidence that the old status quo is a thing of the past. The U.S., of course, will be the last to jump on the bandwagon of justice and human rights, and will only do so when it becomes politically expedient. That that day is coming can no longer be denied.

Also in IMEMC Opinion/Analysis: Brushing Your Teeth with White Phosphorus?